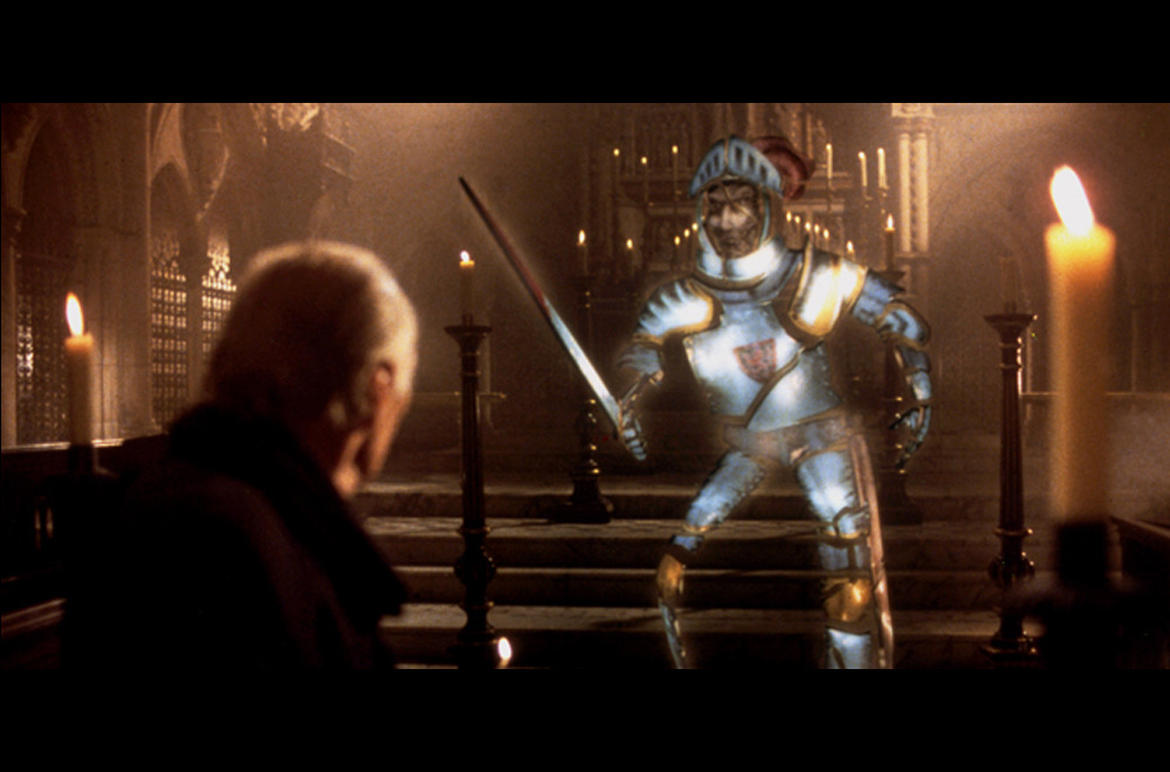 In the 1985 film, “Young Sherlock Holmes” directed by Barry Levison, a stained glass window and attacks the vicar of an Anglican church. This brief 30 second scene is historically exceedingly significant in the history of modern cinema. This was the first time that a composite computer-generated animation with a live-action background. The Pixar group at Lucasfilm used new motion blur technology and its 32-bit RGBA paint system to create the effect.

The CGI character was known as “the stained-glass man” – a knight composed of shards of stained-glass that came to life. With his sword raised, he marched through a church at night, and engages in murderous swordplay with a stunned and soon to be dead clergyman.

The film also featured a stop-motion animated scene in which Holmes sidekick ,John Watson is assaulted by a variety of cakes in a cake shop that come to life in front of him. In another scene, a chicken re-animates on a dinner plate and attacks it’s astonished diner.

It is my firm conjecture that at this film filled with zombie chickens and violent stained glass that movies changed forever, and it can be argued not for the better.

Spectacle has always been a part of the movies, In 1895, August Lumière and Louis Lumière screened a single-reel film to an audience in a French cafe titled “Arrival of a Train at La Ciotat”, a simple shot of an on-coming train. During the screening, the audience physically fled the theatre in fear that a real train was approaching. The novelty soon wore off. 1902, another Frenchman, Georges Melies pushed the limits of technical know-how in his film“Trip To The Moon” (1902), even further. The craft of the special effect was born. In 1940 the world’s first use of the optical printer (a machine to composite film elements) was utilized during the making “The Thief Of Baghdad”.

George Lucas’s “Star Wars” notched up the special effects game by promoting by the creation of the CGI powerhouse Industrial Light and Magic, that fully kicked opened the doors spewing forth a torrent of digital filmmaking . It is this form of filmmaking that now dominates the product coming out of Hollywood. The use of CGI demands a formal and disciplined process, this process is what is changing Movie Storytelling and not in a good way.

At one time more time was spent in the development of a movies script, now the time is spent on CGI. The old adage we will fix it in post is becoming more and more prevalent. At one time writers like Faulkner, Goldman, Chayesky, Towne, Milius and Manckiewicz spun wonderfully executed scripts which audiences hungrily consumed. Their work and their art shaped the visions that came from Hollywood. With the focus on the writing the movies were judged on their artfulness, their truth in telling the human experience and the ability to reach audiences.

With the advent of CGI Hollywood has entered a fast food like existence, make it fast and should be consumed by as many people as possible. Let’s face it folks, Hollywood is turning our cinematic cheese slices as fast as it can. Marvel and it’s tiring universe has become the visual equivalent of Kraft Foods. I do not know about you but I find Hollywood filmmaking lack increasing any sense of innovation or artistry. Once you have seen one planet explode who’ve seen them all. Part of the problem and I think the key problem is that in fact what we are watching is not one movie but in fact two movies. The movie wanting to be made by the director, and the movie wanting to be made by the technicians. Increasingly these two films have drifted farther apart.

To facilitate the rush to market and as well as the demands made by CGI production, two different creative spheres are put in place. The live-action movie that’s shot in a studio or on location and the other movie, the CGI movie tis being made with computers in an alternate digital universe. During the live-action part, the actors work on a green colored set, in order to facilitate matching with the CGI , trying to act while sporting a green spandex jumpsuit, and mouthing lines of dialogue—which will later be filled in at a looping session—while holding imaginary objects and reacting to imaginary dangers. The CGI production will “paint” elaborate costumes on him, fill in ornate walls and furniture behind him, and insert the object he is holding and the enemy who’s threatening him. Like the song says, “It Ain’t Easy Being Green”

Because of the separation of process , the directors often have to complete the live shooting, and even have to complete the editing ogf the dramatic elements of the film before they see the CGI elements ogf a movie. Richard Brody from The New Yorker beautifully cites an example “Consider Jonathan Mostow’s situation when he directed Terminator 3, which began shooting in Los Angeles in July 2002 and had to be delivered to Warner Brothers 11 months later for a scheduled July 4, 2003, release. Since the outsourced CGI part of the production would take subcontractors, such as Industrial Light and Magic in Silicon Valley, eight months to create on computers, Mostow had no choice but to have them do much of the CGI work from storyboards before he had finished shooting the live-action part. The schizoid nature of this feat is eerily reflected in the division of Schwarzenegger’s face: The right side has conventional makeup, the left side is bright green. While Mostow directed the right side of Schwarzenegger’s face in Los Angeles, the digital-animation supervisor in San Rafael directed the CGI that became the left side of the face. By the time the CGI was completed, there was no time (or money) to redo it.”

Marshall McLuhan the Canadian Philosopher of Education Theory wrote ,The message of any medium or technology is the change of scale or pace or pattern that it introduces into human affairs. The railway did not introduce movement or transportation or wheel or road into human society, but it accelerated and enlarged the scale of previous human functions, creating totally new kinds of cities and new kinds of work and leisure.” I would assert that this rise of CGI has changed the form and the fashion of movies significantly. The process of CGI has taken away control of the film away from the directors and has created a totally new visual form. Audience while awed, are not being connected with on a human level and I believe that is leaving a true hunger for pure story telling. Maybe it’s time we re-think our dedication to CGI. To paraphrase Darth Vader ” Don’t be too proud of this technological terror you’ve constructed. The ability to destroy a planet is insignificant next to the power of the story. “