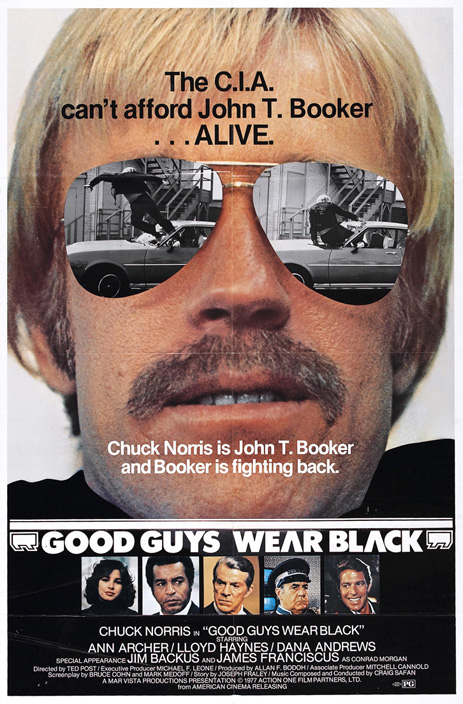 The film begins in Paris , 1973 during peace talks to end the Vietnam War.Later on, Riverside , California, five years later , a mild-mannered teacher named Booker (Chuck Norris) keeps his previous life as leader of a Vietnam commando (Soon-Tek Oh, Pierce, Aaaron Norris, among others) named ¨The Black Tigers¨ unit under wraps until he discovers that he’s number one in a hit list. John Booker attempts to resolve why his former squad are being mysteriously killed, one time the Vietnam war is over.There’s a conflict-ridden love interest as well, Norris falls in love with a lovely journalist (a youngster Anne Archer) who must to save her.

This exciting picture is plenty of action-packed, tension,suspense and cheesy sub-plot to boot with wild stunts .The movie displays a plethora of martial arts fights ,Norris cleans up the nasty fighters by means of punches ,kicks,bound and leaps with struggles certainly slick .It’s violent, frenetic and hectic and not particularly literary but worthy entry in Kung-Fu genre , although runs out energy surprisingly early. Average Norris-thriller ,exciting and tense at times with fine work from Dana Andrews, Lloyd Haynes and James Franciscus as a brilliant and ambitious politician. And of course, Karate expert Chuck Norris who saves the day with lots of visceral violence , he’s a nice wrestler who possesses incredible strength . The film belongs Norris’s early period ,during the 80s as : ¨Code of silence,Delta Force,Silent rage,Octagon,Forced vengeance, Delta Force I,II, An eye for an eye¨ among others with successful box office at cinemas and video-rentals. In the 90s and 2000s with exception of ¨Walker Texas Ranger¨,the Norris star has gone down. Action addicts will give this one a passing grade ,all others need not apply. If you’re a previous Norris fans,you’ll like it but contains enough action and violence for enthusiastic of the Karate genre. The motion picture is regularly directed by Ted Post. It’s followed by the sequel titled ¨A force of one¨ with Norris-Booker as team commander of some undercover narcotic agents who are being eliminated one-by-one.