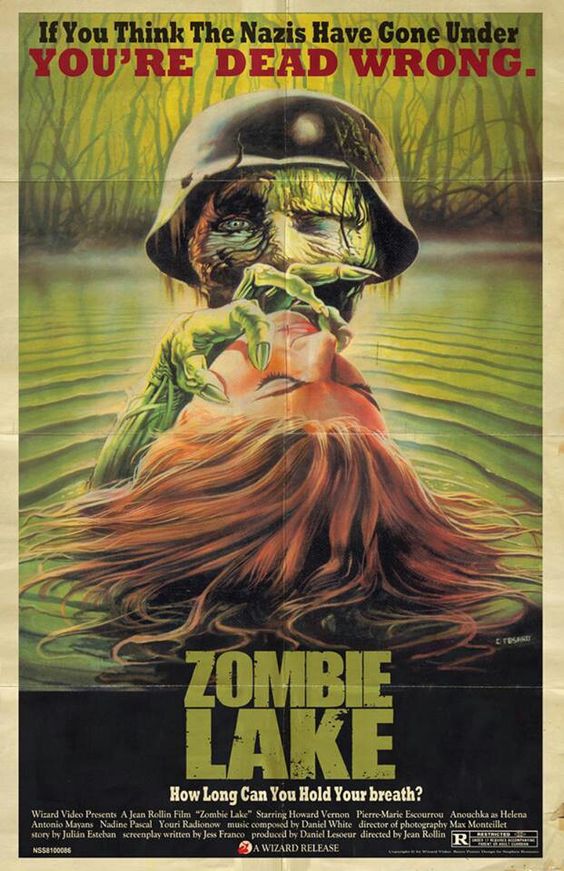 To my knowledge there are technically three underwater Nazi zombie movies. The father of the other two is Shockwaves and really the only one worth viewing. An odd spin off from this film is Oasis of the Zombies and Zombie Lake. Le Lac des morts vivants (Zombie Lake) was a project with Jesus (Jess) Franco’s involvement and directed by Jean Rollin. Although I personally am not too fond of Jean Rollin’s work and definitely despise the hack work of Jess Franco, a man who has never made a movie that could keep me interested, I honestly couldn’t believe Rollin had anything to do with this project. On the outset the movie is horrible, but not nearly horrible enough to keep Jess Franco from remaking the insipid piece of cinematic waste again as La Tumba de los muertos vivientes (Oasis of the Zombies), which had the more interesting moniker of The Bloodsucking Nazi Zombies at one time or another.

Jean Rollin apparently understands one standard of z-grade horror, if the movie you find yourself directing has not one single redeeming feature at all, just pad the movie with ample gratuitous nudity and most viewers will be so distracted they may not notice how horrible the film actually is. Modern directors should take note of this since 99 percent of horror films made after 1986 are boring and virtually unwatchable and won’t go lowbrow because the director thinks he has integrity. Hint, if you’re directing a lame, boring film that is going directly to video anyway and can’t fix it or at least make it interesting you have no cinematic integrity.

Rant aside, Zombie Lake is loaded to the gills with naked woman that just throw caution (and their clothes) to the wind at the sight of this undead infested pond. Naturally the zombies swim around and eliminate all comers in a decidedly stiff and mostly bloodless fashion. The lake scenes are just awful and could well be used by film schools as a glaring example of how to completely destroy anything resembling film continuity. We have naked ladies splashing in knee-deep water. Cut to the zombies completely submerged walking under the girls’ thrashing legs. Cut back to knee-deep water then back to them swimming and freely floating in ten feet of water above the zombies. Back and forth we cut between the lake shots and the underwater shots probably filmed in the deep end of Jess Franco’s swimming pool. Add to this mixture horrible zombie makeup, dull acting, a plot scripted by a highly evolved plankton, Jess Franco, and you have all the trappings of a complete disaster of a film the has Jean Rollin’s name on it. This film runs neck and neck with Oasis of the Zombies for being the worst zombie film ever. Oasis of the Zombies lacks even gratuitous nudity but has other redeeming qualities. Both movies are truly awful and even the cheese factor isn’t high enough to warrant humorous jibes at it. Princesse de l’érotisme Christina (Virgin Among the Living Dead) is still worse than Zombie Lake by light years however and it is, you guessed it, another Jess Franco project. Fortunately the underwater Nazi zombie movie genre played itself out after just a few movies and actually should have ended with Shock Waves. Given with the state of Hollywood these days it should only be another year or so before Zombie Lake is remade by some flash in pan director that is completely devoid of any of his own ideas. It will probably be remade with a multi-million dollar budget and will still be awful or even worse than the original. Is that possible? Oh yes, very possible.