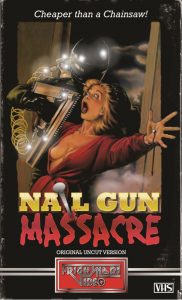 A must-see for bad movie buffs. Fun stuff. A killer drives around in a gold hearse, wearing camouflage and a motorcycle helmet, killing people with a powerful nail gun. Bad acting and bad script (the most important elements of a crummy flick) are here in abundance.

After the massacre has begun, there’s a scene in a small shop where the old lady clerk says “Remember when you could go outside without having to worry about the mosquitoes or the killers?”. Classic. There’s a scene of a couple making out in a car, while the radio plays a song (sung by the director?) called Foosball. The dj talks a moment, and then plays Foosball AGAIN. Watch for the scene near the beginning, of the couple in bed. It looks like a less explicit outtake from a porno. “But you said we could play doctor all day, today!” the girl complains. Then, topless, she walks to a large mirror to comb her hair. The camera then shamelessly zooms in on her breasts in the mirror reflection! Hilarious!

The director, Terry Lofton, recently released a DVD of this movie. At least one scene (a couple in a forest)is slightly extended. Oddly enough, my DVD does not contain any end credits, but they are on my old VHS.

I’d say the movie sucks, but that’s what makes it so entertaining. I would much rather watch this than Lord of the Rings or Star Wars movies. If you’re into this kinda stuff, and you can’t find NGM at your video store, I highly recommend you search for it online.