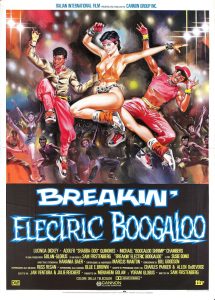 Nothing in the world can prepare you for Breakin 2: Electric Boogaloo. No description does it justice, no warning truly gives you an idea of what you are in store for. Few movies are as bizarre, yet oddly compelling at the same time.

Because one movie wasn’t enough to contain these people; Breakin 2 picks up where the first movie picks off. Or so I assume, I haven’t seen Breakin, but the three main characters Kelly (Lucinda Dickey), Ozone (Adolfo Quinones) and Turbo (Michael Chambers) are the same. In this installment the trio try to save a youth center named Miracles from the clutches of evil (read: white and unhip) government bigwigs who want to bulldoze the unsafe building and make way for a new shopping center.

It’s fortunate that the trio live in an alternate universe in which breakdancing can solve all of society’s ills. No exaggeration here; over the course of ninety-four boogie filled minutes, dancing stops bulldozers, pays bills, ends gang wars, and even cures the ill and the infirm (One person bounds out of the wheelchair in jubilation; apparently they simply forgot they could walk). There is so much dancing in this movie that it frequently appears that the plot is intruding on it, and not the other way around. These are people who work a hard day’s living dancing then go home and blow off some steam by, what else, dancing.

This isn’t a poorly made movie in the traditional sense; it isn’t full of continuity holes or bad special effects. For all its silliness, it probably succeeds in exactly the way it wanted to; as a movie about people who love breakdancing so much they’d rather do that than say, eat, sleep, converse, or share meaningful human contact. More than fifteen years later, it’s terribly quaint, and hilariously dated. But it has a city-wide dance party, a hospital-wide dance party, a dance-filled climax (a shock, I know) and two performances by Ice-T. What more do you want? Do yourself a favor and rent this movie. By the end, you’ll be dancing too.