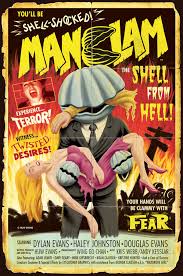 It’s estimated that half of all films ever made have been destroyed or their whereabouts are unknown. All traces of the infamous 1962 monster movie “MANCLAM” were considered lost, until the demolition of an old theatre in central Saskatchewan, Canada brought to light what is believed to be the only surviving poster, seen above, and a battered film canister containing an extended trailer, the restoration of which is nearing completion. No other footage from this notorious B-movie is known to exist.

MANCLAM is filled with delicious puns that will have you roaring with laughter or reeling in horror. I am part of the former. It’s also a great spoof of old black & white movies that had almost all of their characters smoking cigarettes. I can think of worse ways to spend five minutes.