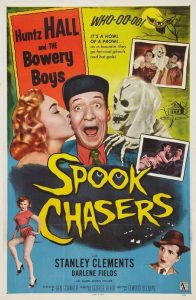 This particular post Gorcey Bowery Boys film is distinguished by having Stanley Clements adopt Leo Gorcey’s gift for the malaprop without the same humor. It also is an attempt to use character actor Percy Helton as the proprietor of a Bowery diner as a substitute for Bernard Gorcey. Spook Chasers is just a pale imitation of the series at its height.

A couple of sharp real estate agents unload a lemon of a house on poor Helton who has been prescribed a nice country rest. But the joke gets turned on them when it turns out a whole lot of stolen loot from a former gang boss is found by the Bowery Boys and Helton. Now gangster Peter Mamakos is after it as well as the agents William Henry and Darlene Fields.

Some good bits are in this especially when Fields decides to vamp poor Sach and gets him drunk in the process. Also Sach manages to wreck and mix up all the house utilities in a bit lifted from Abbott&Costello.

The title Spook Chasers comes from the gangsters efforts to frighten the boys away with ghosts as a last gambit. Still it was all done before in this series and elsewhere.