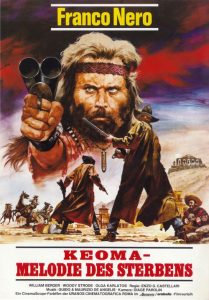 A half-breed Indian Keoma returns back to his hometown after fighting in the Civil War, and finds his town is being run by an ex-Confederate soldier Caldwell and his outlaws. He holds power over the town by letting the plague infect the inhabitants, and since he won’t let any sort of treatment be transported in. He sets up a community for those infected, and this where Keoma rescues a pregnant woman on her way there and returns her back to town. His three half-brothers have joined Caldwell, and I don’t think that highly of their brother’s return. But loyalty to their father, they won’t kill him. His father William Shannon and former family servant/only friend George eventually join Keoma to break the strangle hold Caldwell possess.

Whoa! How good? Real good. Director Enzo G. Castellari’s grand looking and interesting spaghetti western comes across as a powerful and beautifully constructed Greek tragedy with a cynical and almost psychological edge bound to it. There’s a bit everything chucked into this passionate and intelligent exercise. Breathing high on mood and atmosphere, photographer Aiace Parolin exquisitely frames the mercilessly brooding locations and Castellari’s stylishly first-rate direction keeps the film sombre with a brutally unsparing and dirt-laced tone in its dramatic images and context. Good use of abstract lighting and composition, he knows how to keep the viewer at bay with slam-bang set pieces towards the end and a downbeat undercurrent. Inventive framing and exposition also shows the quality of his direction. The glorious slow-motion shootouts and editing technique (ala Sam Peckinpah) are dazzling and how about the constant jumping or leaping in the air. Was there a hidden trampoline on set?! Everything about it held a nice rhythm to it and you just get swept along. Even the flashback sequences are positioned in the story accordingly and in a fulfilling style. The lyrical story is full of symbolic and thematic issues (freedom being the main focal point) that do pack a punch, but also showing a vulnerable side. This gave it a real singular vibe to set it apart from the crowd. Hell, I didn’t mind the uncanny and soaring ballad soundtrack too. The way it actually interlocked with the film’s sequences, I thought it gave the film some soul and a backbone (well other than always charismatically reliable Nero). A rugged Franco Nero was outstanding. Both mentally and psychically in his scrappy determination and seldom figure Keoma. The impressively committed Woody Strode was excellent. William Berger brought class, and Olga Karlatos decently balanced out an innocent side that really was moving. Donald O’Brien nails it down in a starch turn as the villainous Caldwell.