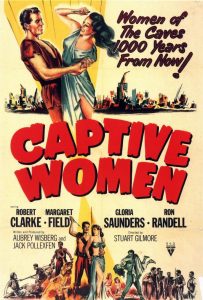 The vaguely titled CAPTIVE WOMEN is set in a post nuclear holocaust world where three warring tribes, “The Norms”, “The Mutates”, and “The Upriver People” battle each other for supremacy in and around the ruins of New York City and its environs in the year 3000. CAPTIVE WOMEN is the first film about the long term effects of nuclear war and how a nuclear war would drastically alter human society. ROCKET SHIP XM (1950) touched on this slightly, with it’s nuclear war destroyed Mars and it’s remaining Martians reduced to savage cavemen. In 1951 there was FIVE, but all that happened in that film was that a nuclear war reduced the number of people down to five. The plot of a nuclear war resulting in mankind being reduced to warring tribes turns up often in many later post nuclear war films, so often that it has become a cliche. Think of MAD MAX and its countless sequels and imitations. This plot was first introduced here.