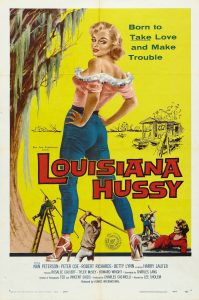 Brothers Pierre (Robert Richards) and Jacques Guillot (Peter Coe) are partners in trading furs and Spanish Moss—“give ya’ll a couple of bushels of moss for a bucket of that stuff Alice B. cooks with”—and Jacques is hacked off at his brother because Pierre is about to marry Lily (Betty Lynn)and Jacques thought he had the inside track on her…and he did, until Pierre gilded Lily with some Alice B. brownies. So, bad-loser Jacques refuses to attend the wedding, and is out gathering moss with his assistant Cob (Howard Wright) when Callie (Helen Forest), an old Gris-Gris woman, who can mix up a mean mess of grits, leads them to where she has found a badly beaten and unconscious young woman (Nan Peterson.) They get her to Doc Opie (Tyler McVey)just as Pierre and Lily are being escorted to their new home by friends following their wedding. Ol’ Opie asks Jacques to carry the beautiful stranger into the newlywed’s house where he has her put to bed. Pierre, wishing to prime his new bride with some Alice B. goodies, naturally resents this intrusion and takes an instant dislike to this girl who calls herself Minette. He steps into the bedroom and tells her she has to hit the road but she throws her arms around him and kisses him…just as brother Jacques passes the bedroom window. Jacques is irked by this turn of events.

He gets more irked later when wily Minette tells him that Pierre had forced his attention on her while she was ill. Jacques moves her into his shack to protect her from Pierre who is, of course, innocent but glad to get her out of his house. Meanwhile Doc Opie brings Pierre and Lily a New Orleans newspaper showing a very beautiful woman identified as Mrs. Minette Lanier (Rosalee Calvert)who had recently committed suicide in the neighboring exclusive community of Grange Hill, a Louisiana landmark because it was three feet above sea level. Pierre and Lily hustle down to “Nawlenes” and look up Clay Lanier (Harry Lauter)who has been on a prolonged binge ever since his wife’s suicide. But his talky servant, Burt (Smoki Whitfield) tells them that the real Minette had been crippled after falling off a horse, and Clay had brought Nina Duprez to his home as a companion for Minette. Nina is more interested at being Clay’s companion and pulls a few tricks and incidents that convinces Minette that Clay is carryin’ on with Nina, and she ups and shoots herself. Clay knows her suicide was engineered by Nina, almost kills her and tries to kill himself, but Burt interferes and, during the scuffin’ scuffle, Nina manages to escape and collapses from the beating and exhaustion at the spot where Callie found her.

Clay sobers up and decides he will go after Nina and finish the job. But the film wimps out after that and nobody else dies and, when last seen, Nina is boarding a Toonerville Trolley heading west.