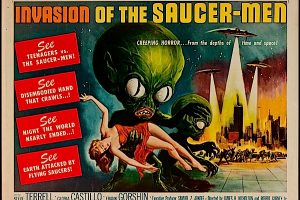 American-International Pictures found their niche in the film industry by catering to the drive-in markets, where films slanted at teens (and actually starring teenagers playing teens — a radical concept at the time)and exploitation markets proved popular. SAUCERMEN, aimed at mixing teens with the then hot sci-fi genre, is such a film

SAUCERMEN has several things to recommend it. The Saucermen, themselves, are intriguingly designed, as is their distinctive saucer, which has the chopped stance of a hot rod and belches actual flames from twin exhausts. Both are the handiwork of Paul Blaisdell, a science fiction fan who provided monster suits for many of AIP’s early genre hits.

Reportedly begun as a serious film, legend has it that the producers took one look at the pint-sized aliens and decided that the film would never be taken seriously. The script was altered and new title art (drawn by Blaisdell), which clearly indicated the film wasn’t intended to be taken seriously, was added.

The story, based on the short story “The Cosmic Frame,” is simple and direct.

Two drifters (Frank Gorshin and Lyn Osborn) arrive in the aptly named town of Hicksville, where there’s literally no action. They make plans to pull out the following morning but Gorshin, now desperate for any distraction, takes their car for a late night cruise.

In the meantime, two teen lovers (Gloria Castillo and Steven Terrell) are at the local lover’s lane, making plans to elope. They ease onto the back road leading away from town, lights off to avoid detection. At the same time, Gorshin is wheeling in from the opposite direction.

Things happen. Gorshin witnesses the Saucermen landing in the woods. The kids, startled by a flash of lighting and only a partial view of their surroundings, run over one of the little creatures, apparently killing it.

The creature’s hand is alive and, removing itself from the mangled body (it has a convenient eye mounted of its own), it slashes the kids’ tire so that they are marooned in the woods. They start walking for help. Meanwhile, Gorshin drives by, sees the deal alien, and sees the chance to make a fast buck.

He contacts a drowsy Osborn (who had previously pooh-poohed the idea of a flying saucer) and convinces him to empty their refrigerator. Unfortunately, the other aliens come looking for their missing pal and kill the already drunk drifter by injecting him with alcohol from needles conveniently contained in their fingertips. They then put HIS body under the car, so it will appear he’d been the victim.

Enter the Air Force, who find and manage to bumblingly destroy the saucer. While they erect a cover up story and busy the minimal wreckage, the Saucermen amble about, looking for trouble.

The lovers return, scorned by the police (who know think they killed Gorshin and are using a wild story to try to get away from formal charges) and bringing along Osborn. The idea is to get proof. Photos would be nice. People always believe photos.

As their car breaks down, the Saucermen attack. The kids accidentally discover that strong light will kill them — causing them to explode. They rally the other teens at lover’s lane, encircle the creatures with their headlights, and save the world. The clincher being that their only “adult” witness, Osborn, has also been jabbed by the Saucermen, and is now too drunk to recall a thing.

SAUCERMEN is a bit jarring for a first-time watch. The design work on the saucer and the aliens looks passable for a serious sci-fi film of the period. There’s also a bit of violence, as a bull gouges out one of the creatures’ eyes in close-up.

Overall, the comic tone mars the picture. It’s a good “cult” film (and worlds above the color for-TV remake THE EYE CREATURES), but you have to wonder what it might have been like if they’d given it a serious treatment.