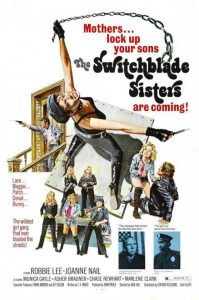 Jack Hill’s ‘Switchblade Sisters’ is a wild ride that will have you hooked from the get go! It’s everything I hoped Ted V. Mikels disappointing ‘The Doll Squad’ was going to be – a trashy, campy slice of 1970s exploitation that manages to be self-parodic AND take its subject matter seriously simultaneously. Happily, ‘Switchblade Sisters’ is so good you’d think you’d dreamed it yourself.

Robbie Lee plays Lace the Debs’ leader, and fulfills all the promise she showed in Roger Corman’s ‘Big Bad Mama’ the previous year. She’s cute but deadly, and why she never became a major star is hard to fathom. Most of the other girls, particularly gang newcomer Maggie (Joanne Nail), and Lace’s former second in command Patch (Monica Gayle), are also sexy and dangerous, but none show the sheer charisma of Lee’s Lace, surely up there with Tura Satana, Pam Grier or Raven de la Croix as a proto-feminist icon of the drive-in era.

‘Switchblade Sister’ is trash par excellence. You will both laugh at and laugh with the Dagger Debs and their rival gang, the disco-dudded Crabs, who could easily walk off this movie and straight into ‘The Warriors’, another surreal gang movie, directed by another Hill, Walter. Both Hill’s deserve their place in psychotronic history!