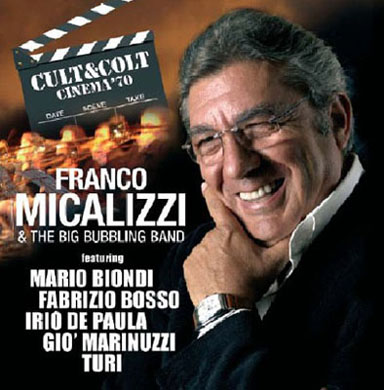 Like so many composers that wrote for the cinema in Italy during the decades of the 60’s and 70’s, Franco Micalizzi began his career in film music composition by writing a score for a western
My first film score was for a Western called The Gun Men of the Ave Maria. This was co-written with Roberto Pregadio who was a very good friend of mine.

It would probably be true to say that the most popular western score that Micalizzi penned was for the first in the series of Trinity movies, entitled THEY CALL ME TRINITY which was
released in 1970, it was this score that caught soundtrack collectors attention, and set Micalizzi on the road to being an established film music composer in his native Italy. The theme song for the movie became very popular both inside Italy and across Europe. I asked the composer how he became involved on the film ?
The big composers at the time were not really interested in Trinity. It was something of an experiment at the time. Being a comedy western made in Italian but aimed at audiences in the United Kingdom and America. So many composers that were offered the film refused it because they were nervous of it failing at the box office. I was lucky enough to be good friend with producer of the movie, who was Italo Zingarelli. He decided to give me a chance and let me compose the score.

Who decided that the film would have a theme song ?
I think it was something of a joint decision between myself, the producer and the director E.B. Clucher (Enzo Barboni), we felt it might help the film be more acceptable to audience outside of Italy having a theme song sung in english.

Yes, I have often wondered about this, who was the lyricist on the song ?
The English lyrics were written by a friend of mine, Lally Stott. He understood perfectly what I wanted and what I wanted to achieve with the song. Unfortunately, he died in a boating accident in Liverpool a few years after we worked together on Trinity.

Micalizzi – Italia, Mano Armata Your score for Trinity was a great success, but you did not work on the sequel or indeed any of the subsequent sequels, why was this ?
Unfortunately there was a little misunderstanding between myself and the producer of the movie about recording rights etc., and this matter to do with publishing I am sorry to say lessened our friendship, so I was not asked to work on any of the other Trinity movies, a shame but things like this happen often in the film industry, I am glad to say that the matter is now resolved.

Two important figures within Italian film music circles are Edda Dell Orso and Alessandro Alessandroni. Franco Micalizzi has worked with both of them on various occasions, what was it like to work with such artistes?
To work with Edda is a joy. It is an extraordinary experience that is uplifting and enlightning. Her voice and her great talent are unique in creating a sensual and lyrical atmosphere. Alessandroni too is a great talent, he has contributed to numerous soundtracks, via his whistle and also his wonderful Choir Il Cantori Moderni.

What made the composer take up a career in film music?
I always had a great love for music and I also loved the cinema. The cinema was a very big source of culture for people of my generation. I think my fascination for films and also for music I heard in them was the reason for me being attracted to the idea of writing film soundtracks, the idea of writing musical themes to accompany the film captured my imagination totally and fascinated me immediately.

So did he come from a family background that was musical ?
No not really, it was not the tradition of my family to become a musician, although I showed an interest from a very early age I could only dedicate myself to the study of music privately, and this was something I had to do after I had finished my education at High School. I gained most of my musical knowledge by my own personal experience and also by studying the work of other important musicians.

Micalizzi has written the music to many films all of which have been in differing genres, i asked the maestro was he happier scoring one genre as oppose to another ?
The real beauty of writing music for film is that you get a chance to work on so many different subject matters: comedies, romances, dramas, westerns, every genre has its own stimulating opportunity for the musician. I do not think that any movie is easier or more difficult to work on, the real problem is to find the right solution for each film, the correct idea for the music on any film is always difficult to find and this requires work, concentration and of course, talent, so I am happy to work on any type of film.

Micalizzi – Albero Foglie Rosa What about scoring timetables, is it the same in Italy as in America and the UK ?
If you mean does the producer want the score completed yesterday? Yes, it is the same in Italy as elsewhere that I think is something that all film music composers have to contend with, and also the edits etc. it can sometimes be very frustrating and stressful,. It really depends on the individual production, some can be a nightmare where you get as little as 10 days from start to finish, but then there are some that allow you a month or even longer, which is a luxury in composing terms.

When did the composer like to become involved on a project, did he read a script or did he like to see the film in its rough cut stage before starting work on the score ?
Again, this depends on the producer, or at times the director. They might have had another composer on the film and decided that the music is not right for the movie, so a re-write is asked for another composer brought in. I have read scripts in the past, but these are a little sketchy and more often than not are changed on a daily basis, so the composer can find it difficult working from a script. You might compose a piece for a scene that gets cut out of the finished movie, so I prefer to spot the film with the director in its rough cut stage. It’s less of a headache, but of course I have written a score for a film by just studying the script, and yes, it did work. I suppose really it is better to start with the script and get ideas and then develop the ideas when you see the almost finished movie.

And how does he work out his musical ideas at the piano or maybe with a synthesizer/pc ?
At one time I did all my work at the piano but things have progressed and now I use a computer as do so many other composers who work on films. Every age places the best instruments at the musician’s disposal, but the only really important thing is the original idea. It does not matter how you arrive at the end product. Without ideas, no computers or synths can be useful.

What other composers have influenced you ?
There are many, Ennio Morricone, Piccioni, Trovajoli, jazz artists, russian classical composers all have had a profound and lasting effect upon me and also have influenced the way in which I write music.

0 40
Celebrating Phoenixville, Home of The Blob