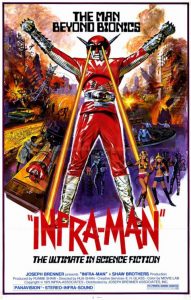 Basically, Infra-Man is every Ultraman/Power Rangers cliché ever imagined rolled into a single movie. A heroic young fellow who’s part of a barely explained government agency (that’s clearly hi-tech, since everyone wears clothes made out of tin foil) volunteers to be turned into an overgrown action figure named Infra-Man to stop the evil Princess Dragon Mom and her band of mutants from destroying mankind. That’s pretty much all the story thee is, and it all happens in the first ten minutes.

Technically, Infra-Man is a spectacular mess. The pacing is terrible, with periods of incomprehensibly frantic speed sandwiched between stretches of mind-numbing boredom. None of the characters have any personality at all (they’re more like props that talk) which is problematic, since none of them get more than half a second of introduction for us to get to know them. The acting is awful on it’s own, and the pathetic dubbing only makes things worse. The `monsters’ wouldn’t even make it onto a Fox Kids show; The Banana Splits were scarier (and they had better special effects, too). Lapses in logic abound (Why does Princess Dragon Mom call us `Earthlings’ when she’s a `prehistoric super human’? How does every one know to shout `Infra-Man!’ when the hero first appears when he’s only been around for about thirty seconds? Why does our hero suddenly jump from being powered by a nuclear battery to solar power? Why is he even called `Infra-Man’ when he has nothing to do with anything infrared? Why does She-Devil always look so bored?) but the film is clearly a lost cause at this point.

Yet, Infra-Man is an absolute blast. Why? Simple: it’s one of those few movies that’s so deliriously bad that you can’t help but laugh. All that bright and colorful spandex jumping around, the absurdly over done sound effects, the almost seizure-like bad acting, the almost nonexistent special effects, and the complete absence of plot are thrown at the viewer at a speed and volume that is mesmerizing simply because we can’t believe anyone would actually do this sort of thing. It’s all so grossly bad that you can’t help but be entertained by it, sort of like a fart but with spandex and monsters.