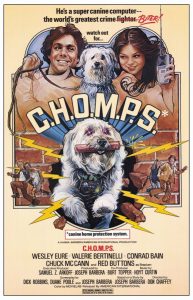 C.H.O.M.P.S which starred Wesley Eure and Valerie Bertinelli has Eure as a young inventor working for Bertinelli’s father Conrad Bain at a security firm. After the latest of Eure’s systems fails, Eure loses his job, but Valerie has faith in him.

And its more than justified when Eure comes up with a computer driven super dog named C.H.O.M.P.S. which has far more powers than your average pooch. With a set of number commands the dog which is modeled on Eure’s real life terrier can do all kinds of things in keeping a given area safe and apprehending those who break in. I’ll let you see the film to see what C.H.O.M.P.S can do.

But there’s also Larry Bishop who is both putting the moves on Bertinelli and secretly working for Bain’s rival Jim Backus. And Backus and Bishop also have a pair of inept crooks played by Red Buttons and Chuck McCann in roles that must have originally been meant for Tim Conway and Don Knotts.

This is a light and amusing family entertainment film that still holds up well for today. Nice and unpretentious, I recommend it highly for juvenile audiences.