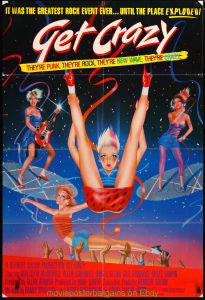 “Get Crazy” is as ’80s as a Flock Of Seagulls haircut or a Ms. Pac Man machine, but when people talk about the decade, for some strange reason it’s off everyone’s radar screen. No one mentions it when you talk about cool ’80s cinema, but it’s better than a pack of “Fast Times” or a pair of “Breakfast Clubs” for my money.

It’s a rare thing to see three such beauties as Gail Edwards, Stacy Nelkin, and Anna Bjorn all adorning the same film, but who on Earth in 1983 could have thought it would be the career highpoint for all three of them? Why isn’t Malcolm McDowell’s fantastically hilarious Mick Jagger send-up as celebrated as Bill Murray’s Carl Spackler in “Caddyshack?” What more evidence do you need that life’s unfair! How about one of the zaniest films since “Hard Day’s Night” celebrating rock ‘n roll passing though the chasm of time with barely a whisper of recognition? Ouch!

Okay, I’m through ranting. Since you are reading this, you don’t deserve this spiel. You care enough to look through these reviews. Perhaps you even managed to find a copy of the film, which may be like climbing K2 for video collectors, forget DVD. Here’s why “Get Crazy” is worth your time.

1. Killer songs – “Hot Shot” and “Take It No More” are pretty boss send-ups of hard rock and new wave from the period. The latter even has some great Shirelles-style harmonies and sax breaks, very B52s.

2. Spot-on sendups – McDowell is great as Reggie, even his last name is a funny dig at the head Stone. Strutting onstage with a giant codpiece and frilly tunic, McDowell has a lot of fun playing it very silly for a change, and the results suit him. It’s great to see such a fine actor cutting up.

3. Goofy set pieces – I like the bit where King Blues is at the graveyard ceremony for his blues musician friend, and every other mourner is blind! Or when Reggie prods his girlfriend with a lobster claw. When we first see Lou Reed as the Dylan send-up Auden, he’s lounging in the same pose and background as Dylan’s “Bringing It All Back Home” album cover except everything’s covered in cobwebs, including the girl with the ciggie! You have to watch this film a few times to pick up even most of the craziness.

4. Political incorrectness – You want sex, drugs, and rock ‘n roll? “Get Crazy” has it. There’s walking joints, ganja so potent it can suspend 220-pound blues legends in midair, and a strange thin man with no face and a suitcase stocked with pharmaceutical cornucopia. And plenty of nudity, even one actress in a bathtub playing a high school girl. Yet you can’t really hold it against “Get Crazy,” because the sex and drugs are there for jokes rather than titillation, sending up the lifestyle we all associate with the music.

5. Relevance to the time – The 80s were the decade of greed and ugly silver-plastic pants, so who is a better movie villain than Colin Beverly? He’s played to perfection by Ed Begley Jr., star of such sleazy late-night R-rated period fare as “Private Lessons” and “Eating Raoul” and just oozing corruption from every pore. The clash of cultures between Beverly and Allan Garfield’s idealistic Max Wolfe, owner of the Saturn Theater and hero of our story, makes for a nice microcosm of the period. It’s like Michael Douglas taking on Martin Sheen in “Wall Street,” only with some drop-dead bass guitar underneath. And then there’s the other culture clash, that of New Wave performer Nada (Lori Eastside crossing Joan Jett with Toni Basil) and McDowell’s take on Jagger’s “Emotional Rescue” period, including a Keef substitute in John Densmore playing drums.

“Get Crazy” can be sad to watch. The director, Allan Arkush, had a lot of talent we never really got to see again because of this film’s unfair fate. Likewise, it has too many good actors who never got another serious chance. There’s also an eerie opening where Wolfe, riding a flying machine, crashes into an electrical apparatus, which is exactly how Wolfe’s real-life basis Bill Graham died years later.

But otherwise this film is just a ton of fun, a time capsule that hasn’t gotten a minute older for all the New Years that have passed between then and now.