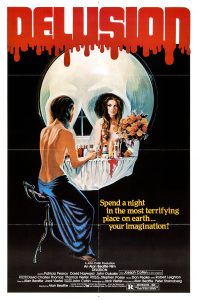 A young nurse named Meredith accepts a job looking after an ageing millionaire in his secluded country home. Almost as soon as she arrives strange events begin occuring. It then becomes apparent that someone is murdering all the occupants of the house and making their deaths look like bizarre accidents. It’s left up to Meredith to try and reveal the killer’s identity before she ends up next on his list.

Firstly don’t be disillusioned by the back of the video blurb that would lead you to believe that DELUSION is ‘a chiller in the mould of THE OMEN or REPULSION.’ This is pure whodunit? owing more of a knowing nod towards Christie than Carpenter. Although saying that, slasher fans will find the odd thrill here, including one or two decent edge of your seat jolts and a couple of brutal slayings. It looks pretty well budgeted, cleverly shot and the cast do their jobs efficiently. The flicks main problem lies in the fact that it seems to drag far too much in between murders and it began to get a little too tedious towards the end. It’s nicely directed and genuinely well acted but lacks the cheese that made most of it’s hack and slash counterparts from that era so loveable.