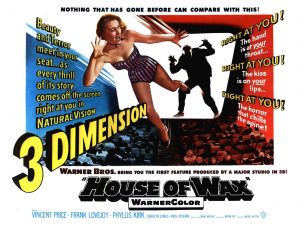 In 1900, in New York, Prof. Henry Jarrod (Vincent Price) is an artist, sculpting masterpieces in wax and exposing them in a small and non-profitable museum. When his partner Matthew Burke (Roy Roberts) proposes a criminal fire to receive the insurance, Henry does not accept and fights with him. Henry is knocked out, left in the burning place and considered dead by the insurance company. When Matthew receives the insurance money, a disfigured man kills him, and later many corpses vanish from the city morgue. The crippled Prof. Henry Jarrod reappears in a wheelchair and destroyed hands, preparing the grand-opening of his wax museum. Meanwhile, Sue Allen (Phyllis Kirk) is impressed with the resemblance of statue of Joan of Arc with her friend Cathy Gray (Carolyn Jones), who was killed and her corpse was missing, and she suspects that her body was covered by wax.

“House of Wax” is good, but also an absolutely unnecessary remake of Michael Curtiz’s “Mystery of the Wax Museum”, which is better resolved. There are many scenes and dialogs that are identical, and this remake does not add any value to the original movie. Vincent Price performs a creepy character and the movement of his body is one of the greatest differences in this remake.