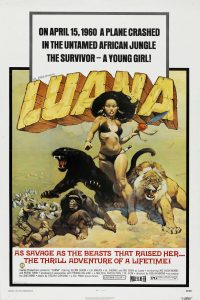 An expedition travels across the African jungle in search for a plane which crashed many years ago. Leader of the expedition is George, played by Dutch actor Glenn Saxson (best known for “Django Shoots First”). He was once saved in the same area from an attack of weird natives with straw masks by jungle girl Luana. Luana (Mei Chen who played a small part in Jean Rollin’s b/w classic “Rape of the Vampire”) gets through the movie without a single word of dialog, but looks cute swinging from tree to tree. She secretly watches the members of the expedition, trying to understand their devices and customs, and radiates an innocent charm.

This is a cheap little flick with the typical ingredients inherited from Tarzan and Sheena and many (involuntarily) funny moments. It has the worst storm scene I’ve ever watched on a screen: 2 trees are wildly shaking their branches, while not a leaf moves on the others. The “lightnings” clearly are made with an electric lamp, quickly switched on and off. And besides, it seemed to me that every time there was a continuity problem, they cut in a scene with a monkey to distract the audience. Lest I forget, the man-eating plant was hilarious. For trash fans only.