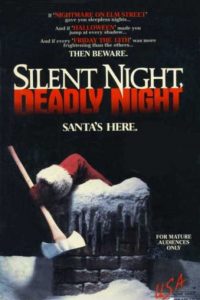 A young boy named Billy is warned by his creepy grandpa that Santa Claus punishes those who are naughty. That night he sees a killer dressed in a Santa suit murder his parents. Needless to say, he doesn’t grow up well-adjusted. Years go by and adult Billy is set off by something that reminds him of that tragic night. So he goes on a killing spree wearing a Santa suit.

This slasher flick has a poor reputation, due in part to the unsavory subject matter and in part to the really terrible sequels that followed it. But it’s actually not half bad. Yeah the premise is unpleasant but we’ve seen far worse in the years since (sadly). The movie spends a considerable amount of time on the build-up to Billy becoming a killer. The first half-hour is devoted to showing his childhood at a strict Catholic orphanage and then his getting a job at a toy store, complete with a montage set to a corny song by some guy who sounds like Kenny Rogers. The point I’m trying to make is they do attempt to craft a story here rather than just give you 90 minutes of splatter. However, once the killing does start, the movie becomes by-the-numbers slasher stuff. Modern horror fans might be put off by the pace and how long it takes before Billy starts killing. One thing nobody should be put off by is the great Linnea Quigley topless. Avoid the abhorrent 2012 remake.