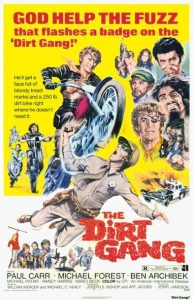 “God help the fuzz that flashes a badge on…THE DIRT GANG”, yelled the ad mat, which depicted a motorcycle gang member on a motocross bike roaring over the screaming head of a highway patrolman. Unfortunately, the “fuzz” who flashed a badge at this gang would probably have a good laugh.

This is not a good movie, despite the fact that there is reasonably graphic rape of local lasses and actresses, and a film set gets trashed bad by these overacting delinquents.

“They take you where ‘Hells Angels’ fear to tread,” the advertising continued, creating audience expectations this crap could never meet. In its favor, the gang members are pretty reprehensible and their attitude towards women is more than slightly nasty.

Not worth crossing mountains and streams to track down, but a good late night bet with pizza and a beer.