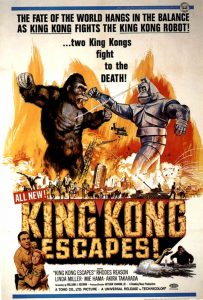 Surprisingly, King Kong’s second Japanese outing, 1967’s King Kong Escapes is a much more enjoyable affair. A co-production with Rankin-Bass to cash in on the success of their animated King Kong TV series, it plays at times like a feature-length episode of Voyage to the Bottom of the Sea (the hero is even called Commander Nelson) with Kong as the guest monster. There’s no Godzilla this time round, though Kong does take on a Gorosaurus in a tribute to the original 1933 version (though Willis O’Brien’s Kong never drop-kicked a dinosaur!) before moving on to a giant RoboKong that those dastardly North Koreans are using to excavate Mineral X from the North Pole. When RoboKong proves to be not up to the task, they go after the real thing, who has conveniently just been discovered by the voice of a thousand trailers Rhodes Reason and his UN submarine crew. Naturally Kong takes a shine to Linda Miller’s medical officer, so to control Kong they kidnap her, Japanese boyfriend Akira Tarada and Reason and threaten them with fiendish tortures at the hands of the villainous Dr Who, who, the Toho lawyers were quick to stress, bears no relation to the BBC’s Dr Who even if he has the same costume, cape, hat and hairstyle as William Hartnell’s first doctor. But to be fair no-one ever described the venerable Time Lord as “an oriental skeleton, a devil with eyes like a gutter rat” or sneered “You’d steal Niagara Falls for a drink of water” at him.

The Kong suit is possibly even worse this time but the MechaKong puts up a much better fight and the action scenes are generally better all round: yes, they’re only models, but it’s still fun to see Kong shake up submarines, smash tankers, drop-kick dinosaurs and scrap it out with his mechanical nemesis atop the Tokyo Tower. This time round it’s the original Godzilla Haruo Nakajima inside the Kong suit, and his superior grasp of body language and the art of fisticuffs pays off rather well. Mie Hama, Kissy Suzuki in You Only Lives Twice, provides the glamour as a North Korean agent but the acting honours among the humans go to Eisei Amamoto’s villainous Dr Who, eating the scenery with underplayed relish like an Asian James Coburn.

Once again this is only available to non-Japanese audiences on DVD in the American version, though this isn’t so much of a problem this time since the American cast were in the film to begin with rather than clumsily grafted on at the last minute and Akira Ifukube’s score is retained (though not credited on the US print).