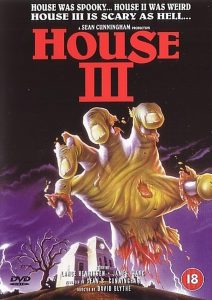 Detective Lucas McCarthy (Lance Henriksen) finally apprehends “Meat Cleaver Max” (Brion James) and watches the electric chair execution from the audience. But killing Max Jenke only elevated him to another level of reality. Now Lucas’ family is under attack, his sanity in question, and his house haunted.

Inevitably, this film has to be compared to “Shocker”. While this one came out first (by a few months), the plots are largely similar and I hate to say it, but “Shocker” is the better film.

Now, this film may be a bit of a stinker because of the rotation of directors and the writing crew not necessarily approving of what they created. The acting is pretty good, and this ranks among Kane Hodder’s best stunt work. But the overall story is just alright and the “evil laughter” gets old after a while.

Stephen Holden of The New York Times wrote, “The Horror Show builds up a good head of suspense, then squanders it in mechanical, poorly staged splatter.” Roger Ebert says that “the execution scene is actually the best one in the movie”, thus somewhat agreeing with Holden that the beginning is better than anything after. (This is also a nod to Hodder, as he was the one on fire for this scene.)

0 39
The Go-Go Boys: The Inside Story of Cannon Films