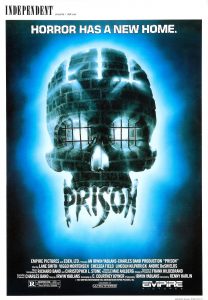 What we have here is a compelling piece of low budget horror with a relatively original premise, a cast that is filled with familiar faces AND one of the most convincing filming locations in the history of horror films. So…could anyone please tell me why this movie is so utterly underrated??? “Prison” is the Finnish director Harlin’s American debut, which still counts as his best effort even though he went on making blockbuster hits like “Die Hard 2”, “Cliffhanger” and “Deep Blue Sea”. The story entirely takes place in an ancient and ramshackle Wyoming prison, re-opened for the cause of over-population in other, more modern state penitentiaries. Inside the former execution dungeons, the restless spirit of the electric chair’s last victim still dwells around. The now promoted warden Eaton Sharpe (Lane Smith) was there already 40 years ago, when this innocent man was put to death, and the spirit still remembers his vile role in the unfair trial. It seems that the time for vengeance has finally arrived. Viggo Mortensen plays the good car thief who has to prevent an even larger body count and Chelsea Field is the humane social worker who slowly unravels the secrets from the past.

“Prison” contains over half a dozen memorable gore sequences but it’s the unbearably tense atmosphere that’ll stick to you for certain! Unlike any other horror picture from that decade, “Prison” features an amazing sense of realism! By this, I refer to the authentic scenery and the mood inside the prison walls, of course, and not towards the supernatural murders that are being committed… even though these are genuinely unsettling as well. The film’s best parts are images of realistic and tough prison-drama sequences combined with visual mayhem and shocking horror. The absolute best terror-moment (providing me with nightmares ever since I saw it at rather young age) focuses on a grizzly death-struggle involving barbed wire. Haunting!! The screenplay only suffers one flaw, but that’s a common one…almost inevitable, I guess: clichés! The story introduces nearly every possible stereotype there is in a prison surrounding. We’ve got the ugly, fat pervert with his ‘cute’ boy-toy, the cowardly and racist guard avoids confrontation at all costs and – naturally – the old ‘n wise black con who serves a lifetime (did I hear anybody yell the name Morgan Freeman?) Don’t stare yourself blind on these clichés is my advise, as there are so many other elements to admire. The photography is dark and moist, the mystery is upheld long and successfully and the supportive inmate-roles of class B-actors are excellent (the fans will recognize Tom Everett, Tom ‘Tiny’ Lister and even immortal horror icon Kane Hodder). Forget about Wes Craven’s god-awful attempt “Shocker” or the downright pathetic cheese-flick “the Chair”. This is the only prison chiller worth tracking down!