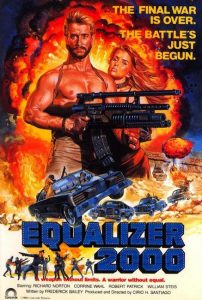 This movie was from an acting, production and plot standpoint awful. The movie is set in a post apocalyptic earth where oil is a natural resource is fought over by tribes of humans. The main character Slade dislikes the “evil empire” the Ownership, who controls most of the ownership. Through a random plot twist Slade joins Corrine Wahl’s tribe and manages to build a 6 barreled super gun that shoots lasers and grenades and weird disks and all sorts of cool stuff. Of course the Ownership wants this gun, and tries to steal it. I’ll let you figure the end out.

I think that this might have one of the lowest production values of any movie I have ever seen. The entire movie is shot in primarily two locations in one canyon. As far as props they asked every actor to bring their own props. About 3 people have matching outfits, while the rest are just hodgepodges of random stuff spray painted silver to try to be more consistent. The buildings are poorly made shacks from random building materials actors had. As for the weapons everyone asked their 5 year old for his toy gun, and brought it to work. If they didn’t have kids they just used PCP pipe.

However the complete junkiness of everything, above average fight scenes and terrible acting makes this movie enjoyable. Although the plot was extremely simplistic it kept me gripped, and I actually wanted to finish the movie, which is more than i can say about a lot of movies with quality similar to this one.