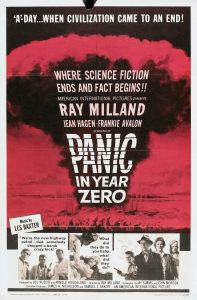 One’s expectations for an early-60s B movie from American International Pictures are never very high. But this movie was a surprisingly well thought out & thought-provoking story.

Just as a family has left LA for a vacation in the woods, the US suffers a massive nuclear attack on all its major cities from, uh, an unnamed enemy. (Wink wink…) But you won’t find any marauding mutants here. In fact this film isn’t about nuclear war per se. It really wants to explore the nature of civilized society. The father, well portrayed by Ray Milland, is grimly determined to protect his family at all costs for as long as it takes for order & civil authority to be restored, which he’s sure will be a long time coming.

The father is a good man, but a little paranoid & controlling. This probably wouldn’t be noticeable in normal times, but now they’re in a panicked rush to escape the LA metro area & gather enough supplies to last for months in the wilderness – ahead of all the other people who are starting to clog up the freeways & empty out the grocery stores along the escape route. The contradiction between following the rules & protecting your loved ones in desperate times is very effectively illustrated as he makes some reckless decisions along the way.

Normally for a low budget 60’s film like this, I wouldn’t even bother thinking about how it could’ve been improved. But since it’s so good at presenting a major moral dilemma in a realistic way, think of these nits as a sign of respect: Milland’s character could use a little more introspection, but of course so could a lot of early 60’s dads! (Not that Milland’s performance was wooden – it was great. But his character had a very constricted personality.) His wife could use a little more assertiveness. She actually realizes this, and explains that she’s still in shock over the attack – but after Sept. 11 a lot of us understand that after a good catharsis we can deal with a lot of trauma that initially would immobilize us. After having a good cry, she could’ve acted as a better conscience for some of the father’s more paranoid acts. Also the daughter’s character needed some fleshing out.

But of course this is an early 60’s film, and clearly made on a low budget. And given its time & budget it is an amazing gem of a film. Definitely one to seek out!