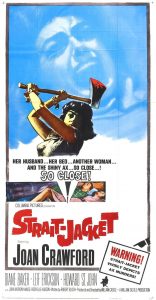 The movie opens with shocking betrayal. Lucy Harbin (Joan Crawford) returns from a journey only to find her husband (Lee Majors) in bed with another woman. She spins into a murderous rampage. With an axe, she evens the score by lopping of the heads of her adulterous husband and his mistress with a big, shiny axe. Her revenge is the fuel for local legend, but the price is twenty years in a mental intuition.

When Crawford is released from custody (fully recovered) the story begins.

The prison bus drops Crawford off at the home of her sweet and innocent daughter, who is very popular and happens to be dating the richest boy in town. She also watched as her mother brutally murdered two people, including her father, but in spite of life’s little setbacks, Diane Harbin is perfectly fine.

With such a humdrum cast of characters, it seems strange when headless corpses start showing up all over town. Who could the murderer be?

This movie is one of the five best movies I saw in 2003. It’s lots of fun, and Crawford’s performance outclasses any I’ve seen. It is a GREAT movie. It’s got LOTS of decapitations, but no gore or fake blood! A modern marvel!