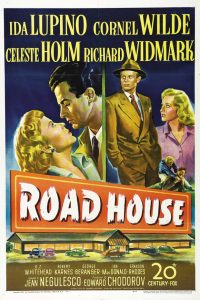 Jean Negulesco’s Road House must have inspired that sentence (or rather fragment). With her voice shredded by Scotch and Luckies, Ida Lupino is the thrush, the canary, whose smoldering cigarettes leave a bar-code of burns scarring the smart paint of her white piano. She’s been brought up from Chicago by Richard Widmark to lure paying customers into the cocktail lounge of his establishment – Jefty’s Road House – up in the piney woods a few miles from the Canadian border. (On one side, it’s a bowling alley – that kind of joint; the only game in town).

In the past, Widmark has been known to engage no-talents who strike his romantic fancy. So when Lupino arrives, Widmark’s boyhood pal and now Man Friday Cornel Wilde, cruel to be kind, tries to send her packing. He fails (‘Silly boy,’ she scolds him after slapping his face). But Wilde was wrong; Lupino brings down the house at her debut, with a gravelly, sprechstimme rendition of the Mercer/Arlen ‘It’s A Quarter To Three.’ (‘She does more without a voice than anybody I’ve ever heard,’ marvels Celeste Holm, another worker toiling under Widmark’s thumb.)

Maybe it would have been better had she packed. Widmark assumes that Lupino’s as mad about him as he about her and runs off to get a marriage license. But after starting off on the wrong foot, Wilde and Lupino find a grudging romance kindling between them, to Holm’s chagrin – she assumed she was Wilde’s girl. (The whole plot’s based on unfounded assumptions.)

When Widmark stumbles upon the truth, he frames Wilde for stealing the week’s take. And that’s only the start of Widmark’s delusional plot to redress the wrong he thinks been done him, to an extent that Lupino turns on him: ‘And you know what else? Your mind’s gone. You’re crazy, Jefty. Crazy!’ Since, in film noir, that’s about the worse thing you can say to someone with a mad little glint in his eye (and demented giggles to match it), Widmark goes totally unhitched….

Like the following year’s Beyond The Forest, Road House is an overheated melodrama set in the cool climate of hunting lodges and icy lakes where loons (not only the avian kind) call through the dusk. It’s a pastoral backwater where routine passions build up to explosive force, without the many vents cities offer for release. (We see it in a drunken bear of a backwoodsman who comes violently onto Lupino, thinking her torch songs were sung not for a paycheck but expressly for him.)

Negulesco was working at the top of his game in Road House, as was Widmark (though we had seen his gleeful psycho before). With his constitutionally dour manner (maybe it’s just his face), Wilde was not one to set celluloid aflame, but the part of victim fits him; Holm, alas, has to grapple with a thankless, ill-thought-out character (it’s an Eve-Ardenish part that needs another splash of vinegar).

But Lupino gets one of her best roles, and runs with it. Scion of a British theatrical family whose roots go back to Renaissance Italy, she never received the star treatment or the prestige productions her talents deserved (she did, however, help to shatter the directorial glass ceiling). As Lily Stevens, world-weary chanteuse of a certain age, she stays the headliner in a dark, accomplished and entertaining movie. It’s a late-show treasure that makes a television an appliance worth having.