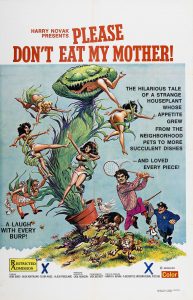 Roger Corman’s “The Little Shop of Horrors” (1960) was filmed in under five days with the teensiest of budgets, yet it is a very funny, consistently entertaining little gem of a movie. The 1972 soft-core remake, “Please Don’t Eat My Mother,” looks to have a practically nonexistent budget, too, but it is hardly ever funny and something of a chore to sit through. In this cheesy cheapie, we meet Henry Fudd, a middle-aged Jewish voyeur who lives with his kvetching mother and basically spends his time ogling horny couples “doing it” in the great outdoors of L.A. He comes into possession of a plant with an alluring female voice and, like Seymour Krelboin in Corman’s original, soon finds himself procuring ever-larger animal species for it to consume and grow on. This houseplant is soon around 8′ tall, and pretty hard to conceal from Mom in his bedroom…. Anyway, this film has absolutely no FX to speak of; the monster plant looks like a 4th grade papier-mache project. We never even get to see the plant attack its human victims; how they wind up inside the plant at all is a mystery to me. But why even critique this movie like a regular film? The flick is essentially just an excuse to show some fairly boring simulated sex scenes, strung together by a very silly story. I must say that it is very strange to see these X-rated scenes, with full male and female frontal, alternating with juvenile-humor vignettes. I can’t imagine who this picture would appeal to today, in this age of XXX-rated DVDs and sci-fi/horror films with top-notch FX. If you want to see what the poor raincoat crowd had to settle for back when, I guess check it out. Beyond the awesome title, there’s little of interest here.