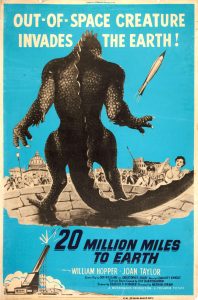 I think the best thing about this movie is that it’s fast-moving. The filmmakers don’t waste a lot of time with unnecessary dialog or a sappy romance. They get right to it and stay on track for almost all of the 82 minutes.

Thus, if you like somewhat-hokey 1950s science-fiction movies dealing with space or monsters, or in this case both of them, you should enjoy this little film. Most of it involves trying to cope with a specimen from Venus which quickly grows into a Godzilla-like monster (but smaller).

It seems a space ship had gone to Venus, but crashed on the way home. Only good-guy William Hopper, who used to help Perry Mason win courtroom cases on TV about this same time, survives the crash. The ship lands in a big body of water off Italy. The specimen, about the size of a trout, washes onshore where a little boy finds it and then shows it to his scientist-uncle. Within hours, it seems, the “thing” begins to break out of its ice encasing and – presto! – we have a small little Godzilla. Hours later, it’s about the size of a small man. Very soon it’s several times the size of a man.

Here’s the good and bad news on the special-effects, which are crucial to a film like this. With Hall of Fame FX man Ray Harryhausen, you know you’re going to get the best of what you can expect from a film 50 years ago. Compared to most films of its ilk during the ’50s, this is good stuff and the creature looks and moves in a pretty realistic manner. The only “goof” is that in some scenes, such as the one in the barn, the monster looks about three feet high in some shots, and 20 feet in others. The scale gets thrown out of whack a few times and then several times later in the film. Thus, you never really know how big this lizard-creature is. Overall, however, it’s still done extremely well for its time period.

There is a scene, too, where the alien creature fights an elephant! Once again, for something 50 years old, they did an excellent job re-creating what that fight might look like. It was well done….and how often do you see a monster fighting an elephant?? Pretty cool stuff. By the way, I watched the colorized version and the monster was green.

The acting is passable, too. Hopper, as “Col. Robert Calder,” knows what’s he doing, as do most others in here. Some of the actors are familiar faces from ’50s and ’60s television. The female interest – which is played down – has Joan Taylor as “Marisa Leonardo.” She’s a bit bland but not bad-looking. She reminded me of Phyllis Coates, from the first season of “The Adventures Of Superman.”

All in all, if you’re looking for a campy and fun, along with fast-moving classic-era sci-fi flick, this is highly recommended. You won’t be bored.