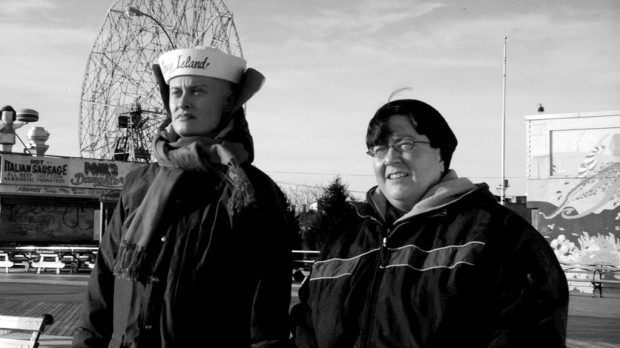 “Codependent Lesbian Space Alien Seeks Same” is a picture out of its time — a ’50s B-movie turned loose in the 21st century with a contemporary twist that never wold have played 60 years ago.

Aiming for Ed Wood territory, it’s shot in black and white. It uses ultra cheesy cheap props; the alien spaceship looks like a hamburger take-out box and the earphones for the ship’s controller are plastic cups. The acting is odd — sometimes amateurish, sometimes just affected. The story is goofy beyond belief.

On the planet Zots, “big feelings,” aka love, is causing the ozone layer to deplete and the planet to burn up. So the Zotians struggling with those feelings are sent to Earth, where it is expected they will fall in love, get their hearts broken and return home with the bad big feelings forever banished.

Here’s the twist that wouldn’t fly in the ’50s: It just happens that all the aliens are female and they’re looking for other women. Hence the name of the film, which comes from a classified ad one of the aliens places in a New York City paper.

The three aliens are the promiscuous (or she’d like to be) Zylar (Jackie Monahan), a nerdy tag-along Barr (Cynthia Kaplan) and the straightforward Zoinx (Susan Ziegler), who is determined to find love.

She accomplishes that when she comes across lonely stationery store clerk Jane (Lisa Haas), who conveniently ignores Zoinx’s high collar, shaved head, weird mannerism and robotic voice, because she’s finally got someone who likes her.

The other major players are a pair of agents (Dennis Davis and Alex Karpovsky) who sit in a van, trying to monitor/track the aliens and have some very bizarre conversations.

All of them play things straight — even the aliens who talk in the cliched, clipped robotic voices and move very stiffly. But it’s just as obvious that everybody connected with the film is working with tongue firmly planted in cheek.

Like the classic B movies, this one’s sometimes very funny (intentionally so, as opposed to Wood’s efforts) and the awkward sci-fi plot makes its point about love and relationships as effectively as it possibly could.

To be honest, it drags in places, again like its ’50s predecessors. But at 76 minutes, it’s over before it wears out its welcome.

Because it’s knowingly made to be so, “Codependent Lesbian Space Alien Seeks Same” isn’t precisely B-movie schlock out of the ‘50s — Ed Wood and his fellow travelers thought they were making great cinema. But it’s as close as we’re going to get these days, and it’s good dumb fun.