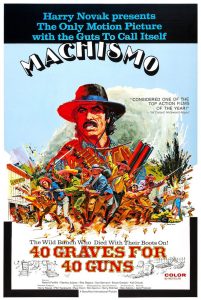 Great Western! Made right near the time of the “Wild Bunch”, it reminds me of the “Seven Samurai” or “The Magnificent Seven” but with seven Mexicans coming up to an American town full of bigots where they should have left after accomplishing their goal, but instead they stay and are faced with defending the town from the “Harris Gang”. The gang uses the town as their own private hideout and the townspeople are cowed into going along with them under the the threat of death if they don’t. The Mexicans gradually are drawn into helping to save them by the lead, Hidalgo (Robert Padilla) and Vicente (Federico Gómez) who fall in love with two of the women. Lopez (Gregory Sierra – under the pseudonym Dirk Peno) begs them to leave and has the right idea, but is ignored by the rest of the Mexicans at their own peril. Obviously very low budget, it never-the-less shows great promise by D.P. Ronald Garcia later to become a well known cameraman and vigorously directed by Paul Hunt, who later went on to make over 20 features and worked with Orson Welles from 1970 until he passed away in 1985. Royal Dano and Stanley Adams turn in very good performances as do all the Mexicans. Worth a view and ahead of it’s time.

0 12
Zombies: An Illustrated History of the Undead