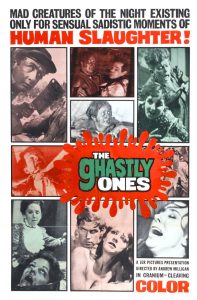 Three sisters travel to their late father’s mansion where they are to spend three nights together with their respective husbands, before they are eligible to hear the will (read to them by a man wearing make-up to rival Ramses’ from Blood Feast (1963)). Also there are the two housekeepers, Martha (Veronica Radburn) and Ruth (Maggie Rogers), and Martha’s deformed and dim-witted son Colin (Hal Borske), who we see murder two people at the beginning of the film. After a night of pompous partying, one of the couples, Veronica (Eileen Hayes) and Bill (Don Williams), find a dead rabbit in their bed (which was previously seen being eaten alive by Colin) with a note attached reading ‘blessed are the meek, for they shall inherit.”

Directed by exploitation and horror hack Andy Milligan, The Ghastly Ones (titled Blood Rites in the UK and placed on the Video Nasty list) is a fine example as to why he is considered one of the worst directors of all time, commonly placed in the same category of Edward D. Wood, Jr. and Herschell Gordon Lewis. He began his career in small-time off- Broadway production during the 1950’s, and his experience in that medium is evident here as, unlike most trashy horror films, the film is almost unbearably wordy, as the main characters have their mundane conversations between the brief moments of gore. Saying that, I would much rather be listening to conversation than watching overlong stalking scenes or disco dancing which was so prevalent as running-time-filler in Grindhouse movies.

However, the movie is a massive bore, and even with the slender running- time of 70 minutes, I checked how long there was remaining at least three or four times. The awful, clunky camera-work, added to the fact that the film stock was so poor I could barely make out faces, gave me a headache. When the moments of inevitable gore come, the film is given a little relief, as the scenes of pitch-fork impaling and disembowelment are so bad it does give the film a little charm. It would work quite nice as a double-bill with the aforementioned Blood Feast, as they are both short, amateurish, and most notably, s**t.