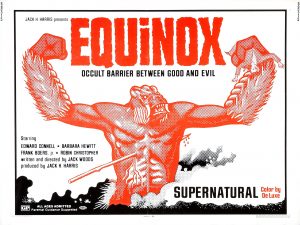 Originally made in 1967, THE EQUINOX…A JOURNEY INTO THE SUPERNATURAL is basically a 70-minute home movie – amateurish if clearly made by fanatics of the horror genre, talented enough to create their own monsters (which aren’t too bad into the bargain)! When the film was eventually picked up for release by Jack H. Harris, he ordered several reshoots, changed the order of scenes around, tightened some others, replaced a lot of the dialogue, etc. – this didn’t necessarily make for a better film (in fact, I think that the original is still the superior effort) but, at least, it now felt like a proper movie!

What the theatrical version did, primarily and ultimately to its detriment, was to eliminate a lot of the surprise which the original held – for instance, the figure of the demon towering over the hero at the very start of the 1967 version is missing from the theatrical-release print; similarly, we’re shown the driverless car which mows him down prior to the accident. Also, the revelation that the demon is taking possession of the characters (having already established that this is what caused the Professor and the hero’s blind date to go crazy momentarily in the re-edited version) takes away from the scene in which his best friend is likewise ‘afflicted’; and, again, the impact of the twist ending is lessened when we already know that Susan is capable of evil.

The teenage leads are likable enough to overcome their essential inexperience; popular horror writer Fritz Leiber appears as the obsessive Professor who unwittingly unleashes the Forces of Darkness in the wilderness; in the 1967 version, we also get to hear the voice of horror/sci-fi authority Forrest J. Ackerman (who, then, appears on the DVD for a special introduction). The one major addition to the cast list for the 1970 version is, ironically, the character played by the re-shoots director himself – a creepy-looking Ranger with the equally strange name of Asmodeus (as it turns out, one of the devil’s various monikers!). While he was, perhaps, intended to beef up the picture’s scare factor (even attempting to rape the two girls), it’s really a pointless role and basically represents a distraction from the central narrative (which deals naively with the eternal struggle between Good and Evil, as shown in an ancient tome kept by a crazy old man living inside a cave – and which involves much religious symbolism and an invisible barrier leading into the netherworld)!

Finally, we get to the special effects: they’re very primitively done and a couple of the creatures (the squid and the giant native) aren’t very effective but the ape-like monster and the demon are quite marvelously designed and one isn’t overly bothered by the essential lack of refinement in the stop-motion animation involved. Unfortunately, the print utilized for the transfer of the 1967 version is very poor – with a number of shots being several generations removed from the already substandard master and lip-synch problems during a fair chunk of the duration (attributable certainly to its rarity, but which also adds to the inherent charm of its rough-and-ready quality)!