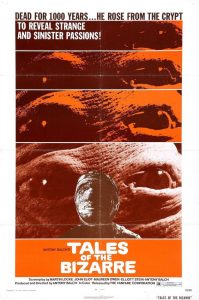 The first story is fairly graphic, a horror-themed tale of torture and depravity which will have any male viewer crossing his legs in sympathy. It concerns a creepy female photographer who employs a handsome young man to pose with a number of torture contraptions for her forthcoming art book. So far, so good, but when the unfortunate fellow is strung up over a “Spanish Horse”, a hobby horse with a huge razor blade between the legs, and left to dangle during a lunch break, things take a turn for the worse as he is slowly castrated. The second story is more serious in its approach, but with an unintentionally hilarious conclusion. A young woman marries an older man, whose previous wife and son have died. Desperate for another boy, the woman gets pregnant but neglected to tell her husband that due to a inherited disease the baby will be born a mutant. The brief-but-hilarious special effects of the mutated child and the fun performance from Kenneth Benda make this a solid and fairly understandable vignette.

The third story literally displays the ultimate use of the “feminine wiles” when a yuppie catches a female cat burglar ransacking his house. The pair are soon rolling about in the sack for an extended session, but the tables are turned for the finale when the woman goes on burgling the house and the man realises he has been duped, and is unable to telephone the police due to what has happened between them. Next up is a silly but pretty amusing spy spoof featuring Maria Frost as Lindy Leigh, Agent 28, hired to track down some top secret documents. Lots of bedroom antics and predictable jokes follow, including the highlight of a wannabe 1929 silent bedroom farce which is absolutely hilarious and spot-on in its depiction of such silent film behaviour.

The next vignette is about a strange young man who hires a call girl and attempts to introduce his pet lizard into the lovemaking antics. She is understandably concerned and beats a hasty retreat, leaving the would-be lover forlorn and contemplating writing to a newspaper about his rejection! There’s a laugh-out-loud flashback involving some roaring model dinosaurs and a heavy dosage of weirdness to make this one completely and enjoyably odd. The final story is probably the least interesting of the lot, but has a neat idea behind it: an old biddy has imprisoned the souls of her previous lovers into her pot plants, which are now kept in her greenhouse! Only there’s a twist when the man that got away returns seeking vengeance…As a film, BIZARRE is bolstered and made enjoyable by a tongue-in-cheek approach and actors who play their parts with a campy and irreverent tone. This is worth tracking down for those who like their movies strange, strange, strange, as it’s unlikely you’ll ever see anything quite like this oddity again.

0 230
The Shoe Drops: The Hasty Removal Of The Paramount Decree