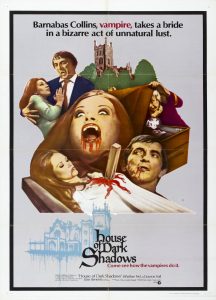 For anyone who enjoys Gothic melodramas, this one is for you. In the late 1960s and early 1970s, producer Dan Curtis was on a roll with his hit afternoon television series Dark Shadows. When the powers that be decided to make a feature film version, most of the original cast members of the daily soap opera were recruited to star in this production. It is worth noting that several of the performers were pulling double duty at the time, since the daily program was churning out new episodes while HOUSE OF DARK SHADOWS was being filmed.

Of course, a feature film version is going to have a much larger budget than its TV counterpart. And it is also going to be made in color, not black and white. Curtis and his crew do a very effective job transferring the basic original ideas to the big screen. In fact, they do not miss a beat introducing vampire Barnabas Collins (Jonathan Frid) and the rest of the inhabitants of Collinwood to celluloid. From the first fade in, it’s a bloody good show, and the entire affair is raised a notch or two by the presence of an old pro– Joan Bennett, doing quite well as matriarch Elizabeth Stoddard Collins, fang you very much!

0 127
A Big Ball Of Confusion: The State Of Movie Going