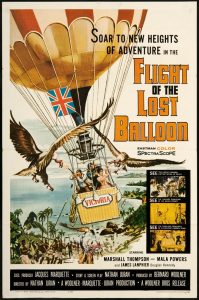 Flight of the Lost Balloon is one of the more interesting failures in the 50s/60s Jules Verne cycle. Rarely seen today, the movie has a game cast, a director with excellent genre credentials, and some outstanding widescreen photography to display. You can tell that the filmmakers wanted desperately to emulate the major epics that had gone before, offering a Verne-inspired plot, lots of stock Verne situations, and a lilting theme song crooned over elaborate animated title work. Unfortunately, you can also tell that they didn’t have nearly enough cash on hand to follow through with these grand ambitions. Flight of the Lost Balloon is not only a low-budget film, it’s a cheap film–and way too cheap to have attempted anything like the continent-spanning adventure story we see sketched out here. The movie seems to be based, if only in spirit, on Verne’s very first novel Cinq Semaines en ballon (Five Weeks in a Balloon). Commissioned by the London Geographical Society, Dr. Joseph Faraday (Marshall Thompson) attempts an aeronautical voyage across Africa to rescue a lost explorer. Along the way, a mysterious, nameless “Hindu” commandeers the expedition for purposes of his own. Despite a lengthy cannibal episode played mostly for laughs, Flight of the Lost Balloon was definitely intended as a straightforward action-adventure movie (quite unlike the “official” version of Five Weeks that would appear a year or so later). The story features several interesting plot twists and includes some effective villainy by James Lanphier, in an oily performance reminiscent of Vincent Price. Sadly, the meager budget ruins everything. The production, apparently, couldn’t even afford a real hot-air balloon: every single aerial shot in the picture appears to have been accomplished with the miniature balloon Thompson proudly displays (as a “test model”) in the first reel! Actually, I wonder whether the budget wasn’t cut drastically during the shooting of the film itself. That’s the only way I can account for several of this movie’s many curiosities. The music score, for instance, disappears completely about half way through, leaving nothing but a long inexplicable silence. Likewise, a major special effects sequence seems half-finished. In fact, I wouldn’t be surprised to learn that the giant condor attack over Lake Tanganyika had originally been intended as a stop-motion set piece ala Ray Harryhausen. Director Nathan Juran had just scored a hit with Harryhausen’s 7th Voyage of Sinbad, and the “Projects Unlimited” effects group hired for Lost Balloon included several expert stop-motion animators. As it stands however, the episode is laughably bad, with two or three see-through condors-on-a-stick buzzing the miniature balloon to no apparent effect. The scene must have looked especially ridiculous on theatre screens. Marshall Thompson went on to star in the “Verne-flavored” Around the World Under the Sea later in the decade, and Juran made one of the best pictures in the entire cycle with 1964’s First Men in the Moon. But Flight of the Lost Balloon is little more than a curio. Yet who knows what it might have been like with just a bit more finance available?