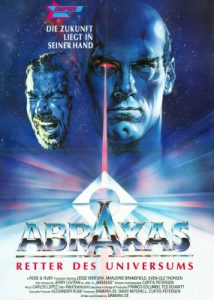 OK. Nobody in their right mind could have expected much from this movie. But even though I knew Jesse Ventura was the headliner and that the budget was low, I didn’t expect this film to be as bad as it was. The most glaring problem, surprisingly, isn’t the acting. It’s the sound. Ventura enunciates so poorly that it is easy to miss half of his lines (not that it matters in terms of moving the “plot” forward), and the sound itself is reminiscent of 16mm home movies. Expanding on the awfulness of the recording quality is one of the worst background soundtracks I have ever been forced to endure. Improvisational jazz, a U2-clone new wave band, and what sounds like a 12 year old with a Casio keyboard are randomly applied to the scenes in a manner reminiscent of the classically awful soundtrack of Manos: Hands of Fate. http://www.imdb.com/title/tt0060666/usercomments?start=10

Ventura and his arch-enemy (Sven Thorsen playing a cross between Grizzly Adams and Arnold Schwarzeneggar) don’t bother with facial expressions, changes in pitch or intonation, This is probably a good thing, because the rest of the cast is actually passable. James Belushi’s cameo is the highlight of the film. His scene is really quite funny, and placed well in the film, since it is likely to bring some viewers back from the brink of suicide. Damian Lee has a remarkable repertoire of poorly made extremely low budget films, and Abraxas is, amazingly, one of his better efforts.

The “plot” consists of two super-beings, one a rogue and the other a kind of intergalactic super-cop, who have arrived on earth. The rogue immaculately conceives with a human in order to spawn “the com leader” (At least I think that’s what they call it – the sound is so bad that even after hearing this about 50 times in various accents, I still don’t know what was being said). The com leader is a little boy who has the ability, when upset, to light fires and “spontaneously combust”. Remarkably, the writers do not seem to have been aware that this phrase connotes self-immolation, not destructive potential. Abraxas’ job is to stop the rogue, and to kill the ‘com leader’. The Com Leader’s mother is played by Marjorie Bransfield (the class of the acting talent here), and she appeals to Abraxas’ super-humanity in an effort to save her son.

Predictable is too subtle. This film is frankly obvious from beginning to end. I can’t recommend it to any but the most disciplined bad movie watcher.