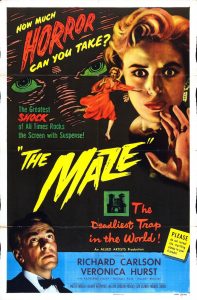 The basic premise of this film with its spooky old castle and an aristocratic family with a skeleton in the closet was a popular theme of films in 30’s and 40’s (THE OLD DARK HOUSE, AMONG THE LIVING,and THE UNKNOWN are a few examples.) The basic plot was probably considered old fashioned or at best “quaint” by the 1950’s when this film was made. I agree with those who suspect that because Maurice Sandoz novel on which this film was based contained a bizarre science fiction twist, this film was made. Instead of an insane twin or assumed dead relative hiding from the law for some unspeakable crime, we have a phylogenetic freak! I think to like this film one must have a taste for offbeat fantasy. If viewed in the right frame of mind and one is willing to suspend their dis-belief, this can be a very enjoyable film. That being said, this film has many faults. The most obvious being that of the often intrusive narration by the “Aunt.” Richard Carlson tries hard, but his performance is not up to snuff. Then there is the “frog.” In most scenes it is shown only in the shadows and in brief glimpses its okay, but at the end when it goes (no pun intended) hopping mad and jumps out the window it looks silly. While this sequence I’m told by those who have seen this film on the big screen in 3D is rather startling, shown flat or on T.V. is laughable. The “frog” looks like a bad rubbery prop. However even with todays high tech special effects, I don’t think a giant frog could be made to look scary now matter how hard anyone tried. While “the maze” of the title is interesting and give indications of Menzies design genius, most of the castle consists standing sets left over sets from previous films. A SIDE NOTE: The science fictional premise of this film is based on the theory of phylogeny. That is that the human embryo goes through stages just like in evolution; a fish, then an amphibian, then a reptile, then a mammal. Sir Roger, the man with body of frog and the mind of a man, stopped developing at the amphibian stage. However according to the theory, the embryo resembles a neotenic salamander and not a frog. May I also add that this theory taught as written in stone in all biology textbooks, has been mostly discredited in recent years.