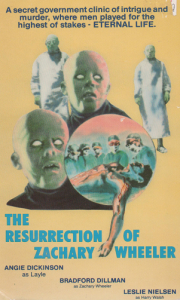 THE RESURRECTION OF ZACHARY WHEELER is a weird little sci fi movie most probably forgotten by today’s audiences. Certainly the low budget of the thing is off-putting, but if you can overcome the film’s deficiencies then you might just enjoy it nonetheless. This is a fun little cloning thriller that plays out with the same kind of verve as a Michael Crichton film or the likes of THE CHINA SYNDROME.

Leslie Nielsen stars in the straight role of a reporter who witnesses a politician being mortally injured in a car accident. Before long the whole thing is hushed up, so he takes it upon himself to investigate and uncover the truth, which is that the government have begun a cloning scheme in order to harvest spare parts. There are a few chase scenes here, alongside some moments involving people in dodgy blue make up, and it’s all very limited. But the film covers the same paranoid government conspiracy ground as many a ’70s thriller, and Nielsen gives a solid performance as the lead. Bradford Dillman and Angie Dickinson play in support.