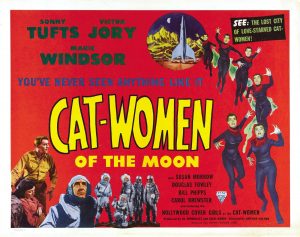 Mission Commander Sonny Tufts and his crew of space explorers brave the perils of a hostile Moon. They are threatened by a giant Moon spider and captured by telepathic lunar Amazons in black tights. A love triangle develops between Sonny, one of the Moon women, and a fellow crew person (Marie Windsor).

Okay, so it’s not a great movie, but it was originally filmed in 3-D, and the music is by Elmer Bernstein (who scored both `The Ten Commandments’ and `Robot Monster’. What a career!).

The 1958 film `Missile to the Moon’ is essentially a remake, complete with the giant spider. The only improvement it makes is to give the girls more colorful costumes.

Just for the record, the other films with all-girl alien worlds are `Queen of Outer Space’, `A & C go to Mars’, and `Fire Maidens from Outer Space’. The girls in `World Without End’ are from Earth, and there are a few men, but they’re wimpy compared to the astronauts who show up to romance them.