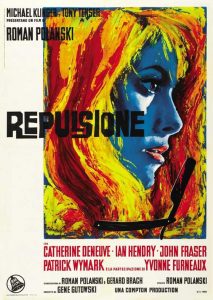 Roman Polanski’s movies divide movie fans. Even admirers of his output will single out a particular movie that just doesn’t work for them (in my case it’s ‘The Fearless Vampire Killers’, which for me is an utter waste of time). But I would bet that virtually every Polanski buff would list ‘Repulsion’ as one of his very best movies. It’s a brilliant exercise in unease and paranoia that has lost none of its power of the years. It is still one of the most disturbing movies ever made, and manages to evoke an atmosphere filled with dread and fear without resorting to obvious shock tactics. Catherine Deneuve is perfect as a beautiful and disturbed girl slowly lost to delusion and phobia. This is arguably her most memorable role along with Bunuel’s equally brilliant ‘Belle De Jeur’. The rest of the cast is interesting, and includes Yvonne Furneaux (‘La Dolce Vita’), underrated Brit character actor Ian Hendry (‘The Hill’, ‘Theatre Of Blood’, ‘Get Carter’), John Fraser (‘The Trials Of Oscar Wilde’), and Patrick Wymark (‘The Conqueror Worm’, and Hendry’s co-star in the fascinating but almost forgotten ‘Journey To The Far Side Of The Sun’). All the cast are excellent, but Deneuve’s unforgettable performance is what really sticks in your mind long after the movie is over. That and Polanski’s accomplished and tense direction make this movie essential viewing for all movie buffs. One of the most important and impressive movies of the 1960s, and one of the most chilling horror movies ever made.