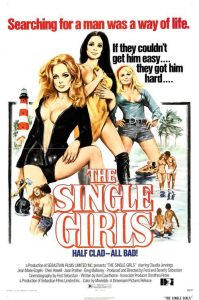 An odd little iconoclastic film, it combines the whodunit of Agatha Christie’s `Ten Little Indians’ (directed by George Pollock in 1965), the sexual liberation slant and anti-conservatism spirit of Ted Post’s `The Harrad Experiment’ (1973), and the slasher films that followed and soon dominated the horror genre. One wekend, an eclectic collection of men and women travel to a remote Caribbean island resort where Dr. Phillip Stevens (Wayne Dvorak) administers a sexually-liberating form of psychotherapy that involves behaviorism exercises and sensitivity training with members of the opposite sex. Unfortunately, this call to growth and awareness unleashes a new recognition in one of our travelers, which leads to a killing spree. It’s pretty easy to spot the murderer, though directors Beverly and Ferd Sebastian pepper the story with subtle allusions to other members. The whole film is dimly lit (except the outdoor scenes) with jumpy editing and groovy music, but some handheld camera angles and point-of-view shots keep things interesting. Also, in the greenhouse scene, which is filled with poinsettias, the Sebastians create a visually appealing scene reminiscent of something a budding Dario Argento might have tried. The cave scene, on the other hand, tosses out some phony bats that flap around like wet garbage bags! 1970 Playmate of the Year Claudia Jennings is great, remindful of a young Bridget Fonda, and may have had a long film career had she not been killed in 1979. Likewise, the plastic-looking Cheri Howell is also good as Shannon, though she never appeared in much outside of this film, save `Sisters of Death’ (1978), which also starred Jennings, and `Soylent Green’ (1973). She almost looks like a Russ Meyer version of Penthouse Pet Aria Giovanni. Joan Prather, who would later join the cast of `Eight Is Enough’ as Janet Bradford, makes a decent film debut here too as Lola, the girl with rape fantasies. All three get briefly naked at one point or another. Playboy Miss December 1972, Mercy Rooney, who wore wool chaps and stood in front of a chair made out of horns in her centerfold, appears for a brief moment in the film’s intro, only to be shot with a crossbow (predating the kill the star in the opening sequence of `Scream’). On top of all that, the supporting cast is nothing to scoff at either! Horror-film vets Victor Izay (“The Astro-Zombies”) and Greg Mullavy (`Vultures,’ `I Dismembered Mama’) are featured, as is Albert Popwell who starred in several of the Dirty Harry movies with Clint Eastwood and was well-known as one of the Johnson brothers in the “Cleopatra Jones” series. It’s a film worth noting for its time and stimulus – a slasher film for fans of Robert Rimmer’s sexual awareness manifesto of the ’60s!