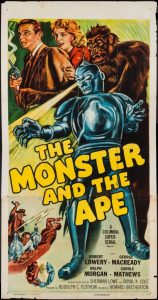 The Monster and the Ape (1945) was the 26th serial released by Columbia Pictures.
The Monster of the title is the “Metalogen Man”, a robot created by Professor Franklin Arnold. After displaying his invention, the robot is stolen by Professor Ernst with the aid of his trained ape, Thor. Ken Morgan leads the attempts to recover the stolen robot.The Monster and the Ape was, in the opinion of Cline, “strikingly similar to Republic’s serial Mysterious Doctor Satan.” However, he describes Professor Ernst as one of “the serial form’s…choicest villains.