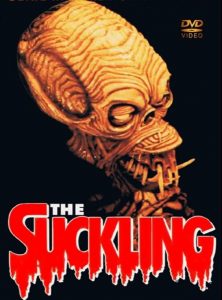 Check out the outrageously tasteless premise for The Suckling (AKA Sewage Baby): an aborted fetus, removed by coat hanger in a back street clinic, is flushed down a toilet and winds up in the sewer where toxic sludge mutates it into a huge monster that attacks the occupants of a brothel.

What sounds like a hugely enjoyable trash classic in the making is seriously hampered by terrible performances, a frequently dull script that spends too much time on the characters chatting about escape when it should be delivering scares and piling on the gore, and an incredibly goofy creature that looks like something H.R. Geiger designed for a laugh. In short, it all feels like a wasted opportunity.

Made on a tight budget, the film is clearly a labour of love by writer/director Francis Teri, making me feel a bit bad for ragging on it, so here’s a few positives to ease my conscience a little: the electronic score is rather effective, there are some fun attempts at stop-motion animation, and Teri achieves one or two genuinely inspired moments of absurdity (the shonky puppet creature returning to the womb being a hilarious highlight).