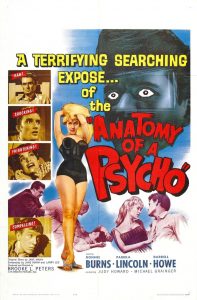 Chet Marco (Darrell Howe) is despondent after the execution of his big brother Duke, whom he idolized. Chet is the only one who doesn’t believe that Duke, a career hoodlum, committed the murder for which he was sent to Death Row. Following a back-alley brawl in which his face is cut up with a broken bottle, Chet becomes increasingly angry and paranoid. He swears vengeance on those he deems responsible for his brother’s death. Chet beats the crap out of the attorney general’s son, sets the judge’s house on fire, pulls a knife on the son of the prosecution’s star witness, stabs an innocent bystander to death, and pins the murder on his best friend (Ronnie Burns, the adopted son of George Burns and Gracie Allen).

All that happens in the first 45 minutes, leaving us with a plodding courtroom drama in the movie’s final half-hour. Director Boris Petroff either paced his film at the speed of molasses, or was too inept to realize he was doing so. Adding to the dullness is an uninspired script and a cast of unknowns with the charisma of Steven Wright (but none of the humor).

Despite its classification as a horror film, this is really a juvenile-delinquent movie with a loonier-than-usual protagonist. The title was an obvious attempt to cash in on two far better movies of the time. If you’re in the mood for a 1950s J.D. film, you’re better off with “High School Confidential.”