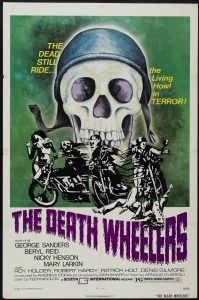 Tom Latham is the leader of a delinquent motorcycle gang known as The Living Dead – his fascination with the paranormal fed by the death of his father and the clairvoyant gift of his mother. When he is finally allowed into a room that has been locked since his father’s death he learns a secret – that, when you deliberately die and totally believe you will return from the other world, then you will do so and will truly become one of the living dead. During a high speed chase, Tom deliberately goes off a bridge and is buried by his gang in their way – on his bike in full leathers. And this is how he returns to life again, but more powerful than an human and with his juvenile delinquent streak now turned into a murderous callousness.

Everyone is keen to stress how “bad” this film is but I do not think that that is fair in any way. OK it will not be challenging for the top of many “greatest film of all time” lists (well, maybe “greatest undead biker movies” list) but it is what it is and it works as such. What it is is a British b-movie, made cheaply and with a clear agenda to cash in on both the zombie and motorcycle youth genres by going for the base requirements of both groups. Of course, outside of the world of the b-movie it is no earthly good at all and, even as one, there are areas that could have been better. The main area of this for me is the fact that, once undead, the gang simply continue to terrify old ladies in shops, rather than becoming more ambitious in their actions. Otherwise though, the “problems” are all part of the genre – bad dialogue, basic effects, average actors and so on. All of these are at the level one would expect but add to the pleasure of the film as a b-movie; it doesn’t ever take itself seriously, which again is part of it working.

The cast are mainly long-haired youths who can do limited work with the material but probably would not do much better with more. Henson is in permanent “cocky” mode but is good enough, while Larkin does a good genre performance of being freaked out and a bit frightened. She is in the shadow of Michelle looks-wise, mainly because the latter’s performance is pure pouting and such. The rest of the gang are so-so biker types. The real surprise of the cast is George Sanders – for whom this was his last film as he was to commit suicide the next year. He is an effect presence and it is a shame that more was not made of his part in the film.

Psychomania has something of a cult following and you can see why because it is good enough as a genre b-movie to be a sort of trashy pleasure. Don’t go into it expecting anything more than that and you will find a curiosity b-movie that is trashy but strangely enjoyable.