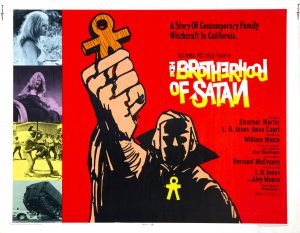 ‘Brotherhood Of Satan’ is a very interesting and overlooked Seventies Satanic thriller. Initially you might lump it in with silly-but-fun schlock like ‘The Devil’s Rain’ and ‘Race With The Devil’ but it’s actually a much more complex and ambitious movie with a much more serious and less sensationalistic approach. T.V. veteran Charles Bateman and Ahna Capri (‘Enter The Dragon’) play a couple on a road trip with their young daughter (Geri Reischl – ‘I Dismember Mama’) who find themselves in a mysterious and hostile small town gripped with hysteria. Townsfolk have been brutally murdered and children kidnapped and nobody is quite sure why. Glance at the title of the movie and take three guesses! ‘The Wild Bunch’s L.Q. Jones (who also co-wrote and co-produced) and Strother Martin (the latter probably best known for his role in ‘Cool Hand Luke’ – “What we have here is a failure to communicate!”) star as the town sheriff and doctor respectively. This is one of a half a dozen movies they made together and it is always a joy to see them sharing screen time. They made a great team which was unfortunately cut short with Martin’s death in 1980. The supporting cast also includes Hank Kimball from ‘Green Acres’ (!) Alvy Moore, a real kick for buffs. ‘Brotherhood Of Satan’ is a surprisingly creepy and effective horror movie with a sometimes fascinating approach to narrative. A movie that is ripe for rediscovery!