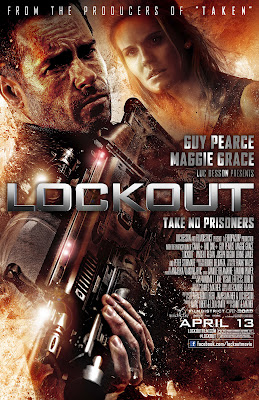 The funniest moment in Lockout, especially in hindsight, is a credit that appears which states that the film is ‘based on an original idea by Luc Besson.’ Written and directed by James Mather and Stephen St. Leger, the film is the sort of genre rip-off that is so old that it almost feels new again. This film is as unoriginal as a movie can be without being a sequel, remake, or reboot. That it is none of those things inspires a token amount of warm feelings, which in turn says something about the state of the industry. Guy Pearce may be attempting to create a new Snake Plissken, but the film’s template is pure unadulterated Die Hard. More than that, Lockout feels less like a riff on Die Hard than a science-fiction and comparatively large-budget variation on the countless direct-to-VHS Die Hard rip-offs that prospered during the uber-late hours of HBO-5 or Showtime-6 just before DVD hit the mainstream. With occasionally awful special effects, a bare minimum of decent acting, and a down-and-dirty sensibility that belies its existence as a mainstream theatrical feature, Lockout feels less like Die Hard on a space prison than No Contest on a space prison.

The plot? Its 2071(-ish), and special agent Snow (Guy Pearce) has been wrongly convicted of espionage and is about to spend a long time in Demolition Man-style prison-hibernation. But fortune ‘smiles’ when a visit to the floating out-space jail of the future by the president’s daughter (Maggie Grace) triggers a full-blown breakout which of course escalates into a hostage situation. A full-blown armed assault will likely lead to the slaughter of hostages, and besides, nobody cares about the ones who aren’t kin to the commander and chief anyway. But if they can send someone… just one man, into the prison and get Grace’s Emile Warnock out of harm’s way, then the government can do what it deems necessary. Where could the US government find such a man, and who would be crazy enough to agree to such a dangerous mission? As the newly freed prisoners figure out how to escape, they quickly discover that, say it with me now: “There’s one man they didn’t count on!”

The film is layered with a healthy helping of cheese, and it’s clear from the get-go that we’re not supposed to have too much emotional investment in the carnage. Pierce relishes the chance to play a classic anti-hero, even if he’s among the few actors who doesn’t feel a bit lost in space. Maggie Grace struggles with playing a seemingly competent professional who nonetheless finds herself in constant peril and on the receiving end of some borderline-misogynistic ‘romantic banter’ during the second act. Once the film gives her the moral upper hand, she adjusts accordingly. Peter Stormare again flounders with another overly cartoonish supporting turn, although Vincent Regan gives a surprising level-headed credibility to the unofficial lead-villain. Jacky Ido is weirdly refreshing as he plays a seemingly upstanding and authoritative African-American who is nonetheless completely responsible for both the initial break-out and also for various incompetence-related snafus that occur in the first half of the film. In an age where too many films are afraid to cast African-Americans as anything other than completely upstanding and/or uber-competent, it’s kind of fun that this film doesn’t care about making at least one of its major African-American characters a total incompetent (progress comes when minority characters can be just as flawed as Caucasians).

The action is more about escapes and near-misses than extended shoot outs and fight scenes. The majority of the violence is merely spurts of homicidal aggression, and there is a surprising lack of urgency in terms of actually making any effort to kill any of the bad guys. Some may carp that there aren’t all that many scenes of Guy Pearce engaging in armed or hand-to-hand combat with various colorful villains, but there are enough impressive stunts and spectacular deaths to make up for the lack of brute conflict. The special effects are serviceable, but they are also occasionally so bad that I’m presuming it was intentional (the opening chase scene has some of the worst CGI you’ve seen in years). Again, this is a cheeky little B-movie, so pitch-perfect effects work is not only unnecessary but might somewhat detract from the old-school feel. The fact that this film is set in the future is amusingly beside the point, as the whole ‘it’s a space prison’ only matters art certain intervals and the film’s narrative feels absolutely 1997 (apparently even in 2070 people won’t use hands-free devices for cell phones while in a car chase). The film creaks a bit in the second half and I wish there were a few more colorful villains, but Lockout delivers exactly what it promises.

The biggest problem with this film is frankly its rating. Despite the fact that this is clearly R-rated material with an R-rated sensibility, the film (like prior Luc Besson productions like Taken and Colombiana) is visually cut and audibly muted within an inch of its life to get that PG-13. As I mentioned above, the film feels more akin to the often unpleasantly-violent Die Hard rip-offs that populated the video stores than theatrical rip-offs. As such, the violence is indiscriminate and wanton, with security guards and civilian personal being executed left-and-right with hardy a moment of reflection. That’s not an issue with the film per-se, but it is both disconcerting that this kind of film would be considered ‘appropriate’ for young kids purely to the lack of blood and gore, plus it’s detrimental to the film’s flow as a compromised product. I’m not one to recommend a film that basically works while recommending that you perhaps wait until DVD to see it. But in this case, the all-but certain ‘unrated’ DVD cut will surely be both a more honest film and a slightly more coherent one.

But quibbles and MPAA issues aside, Lockout is a refreshingly laid-back throwback to a pulpier and less pretentious type of action picture. It is more than a little sad that the film earns points for merely being a rip-off of “Die Hard-in a… ” with a bit of Escape From New York thrown in. In a time when studios seem obsessed with brand-awareness which is causing them to remake every plausible genre property over the last thirty years, the fact that someone didn’t just change a few details and call it Escape From New York is almost an act of courage. Lockout is not a remake or a reboot. It is painfully unoriginal, but it has character and style to spare. It is a rip-off, which today makes the film stand out. If only that courage extended to its MPAA rating, but that’s a discussion for another day. Lockout is an easy film to recommend if you are inclined to want to see a film called Lockout in the first place.

0 46
The Warrior and the Sorceress

0 45
Zombeavers may be the next Sharknado