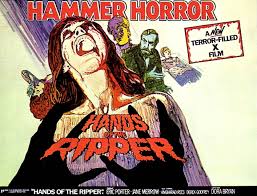 Orphaned teenager Anna (innocent-looking Angharad Rees) is placed under the care of the awful Mrs. Golding (Dora Bryan), a fake medium who uses her in moneymaking schemes and pimps her out to customers, which leads to her murder. Anna is adopted by Dr. John Pritchard (Eric Porter), an early follower of Freudian philosophy, who tries to help Anna when it’s revealed she’s the daughter of Jack the Ripper with homicidal tendencies of her own after seeing dear old dad murder mum as a child. Dr. Pritchard is so obsessed with Anna and his research that he isn’t above covering up the murders that follow.

The performances are first-rate, the turn-of-the-century London flavor is accurately captured, the murders are pretty bloody for the time and there’s a great, subdued ending at the “Gallery of Whispers.” Fine period horror from Hammer Studios, originally shown on a double bill with TWINS OF EVIL.